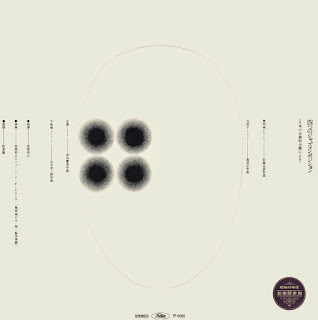 Toshiyuki Miyama is a key figure in Japanese progressive big band music. He started playing jazz with his band before WWII. After the war, his big band was a hot name in the US Navy clubs in Japan. His first recorded albums contained big band classics and popular tunes of the time up to the late 60s, when the avant-garde jazz invasion (mostly introduced by young Japanese jazzmen returning from jazz studies in the States) revolutionized the country's scene.

Starting in 1967-68, Miyama adapted a new sound playing with leading genre local musicians. "Four Jazz Compositions" is not his band's first advanced release, but one among a few very early such albums, and one of the rarest. Still, its rarity is not this album's main attraction (unless you are collector), the presented music is quite unique, even for that extremely advanced time.

It's a public secret that discussions about originality (or better to say its absence) in Japanese jazz had long decades of history. Here, on "Four Jazz Compositions", the listener will easily find some early evidence of what can be tagged as "original Japanese elements".

The album's opener, the ten-minute long "Mumyoju", is composed by Japanese leading avant-garde pianist and composer of the time, Masahiko Satoh, (he plays on it as well, but percussion, not piano). It begins with silence pierced with ascetic needles of percussion, minimal brass splashes and koto. Still silence (or "free air", as it is often called in Japanese avant-garde music) is the largest and most important composition component. The music here is near static, in moments meditative, but more often - quite dramatic and recalls early Western contemporary avant-garde compositions, just with an Eastern touch.

The second composition,"Shirabyoshi", opens as if it's just a continuation of the previous one, but very soon piano, bass and the brass section take their part - here one can be sure that all the Orchestra is in action. From meditative slow tempos, it grows fast to an orchestral jazz-rock sound, but on the four minute mark, Miyama cuts the sound. What follows sounds like a well arranged pop-tune, or movie soundtrack. It doesn't last long though, at the sixth minute the orchestra moves toward a full-bodied big band sound with a muscular rock-influenced rhythm section and brass fireworks. Growing tensions explode close to the ten minute mark and continues as nervous mid-tempo orchestral "Ikisudama", recalling a more contemporary avant-garde piece than any form of jazz. The listener shouldn't be bored though - somewhere in the middle the music somehow naturally transforms to a full bodied big band sound, something that could be played by Mingus. As if it would be not enough, the orchestra explodes with distorted sound, a lot of almost cacophonous brass soloing and at the end returns back to base - slow down till almost meditative, even if still nervous in moments, avant-garde chamber orchestra sound.

The fourth and final composition opens with a drum solo and rolls ahead as a tuneful richly brass arranged jazz-rock song, very cinematic, but still with some small distortions here and there. At the end this forty minute long album, it stays in your memory as a gallery of musical pictures, some more organically related than others, but never boring.
Posted by Zen Archer at 9:19:00 PM