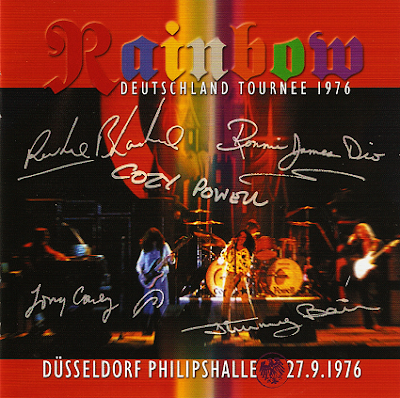 Remastered from the master tapes cut in September 1976 (and presaging another set from Nurnberg due later this year), this eight-song 2-CD sees Ronnie James Dio on ever-mighty form, raging over the punchy percussion of Cozy Powell on opener Kill The King, before the gargantuan pomp-rock of Mistreated – all organ rushes, lofty guitar and Cream-like interplay (marred only by some nasty vocal/guitar call-and-response). The surging 16th Century Greensleeves is followed by the pomp crescendo and blues comedown of Man On The Silver Mountain, while Disc Two is comprised of a 16-minute Stargazer and 18-minute Still I’m Sad. Indulgent, flashy and eye-popping, the latter even takes in Ode To Joy and Mozart motifs, doffing the cap while harboring grand pretensions… and all in fine style.

Recorded a mere two nights after the already released 'Live In Cologne', this is, remarkably, even better. The mix seems clearer and the band performances seem to have notched up a degree. In particular, the often maligned keyboards of Tony Carey seem more integral.
But on to the stars of the show. Ronnie James Dio is in fine fettle, especially on what is my new favourite version of 'Catch The Rainbow' , Cozy Powell demonstrates that he was the greatest rock drummer ever (rebuttals on a postcard to someone who cares - for goodness sake, listen to 'Man On The Silver Mountain' for proof) and the workmanlike bass of Jimmy Bain is never less than workmanlike!
And then there's Ritchie. Now I've probably heard thousands of hours of his playing including (whisper) boots of this tour but, cleaned up and polished, I'm convinced this was when he peaked. Back in the box Purpleheads, this was when the line between genius and Xmas carols was straddled with most applomb.
So, as the Cozy 1812 Overture crashes through my head again, I doff my syrup to Mr Blackmore one more time. We shall never see his like again. Absolutely essential for fans of the man, this is an hour and a half you will want to relive over and over. 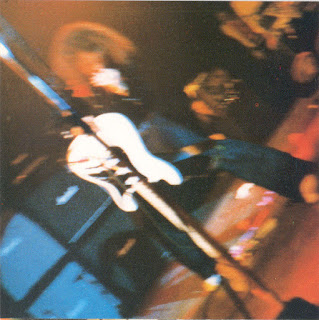 One of the greatest concerts that I attended ever, was Rainbow at The Berkeley Community Theater in 1976. It was between Fleetwood Mac in San Francisco or Ritchie's new band, as both shows were on the same night. The entire crew voted for Rainbow. This was a very wise choice by a bunch of acid-fried loonies...Rainbow, was THE show of the mid 70's that could not be topped by any other band in the world.

"Dusseldorf, 27.9.1976" is an fine audio document of the greatest version of Rainbow that stormed the stages on the planet in 1975-1976. With Cozy Powell: Drums, Jimmy Bain: Bass Guitar, Tony Carey: Keyboards, Ronnie James Dio: Vocals, and Ritchie: Guitars, this was the band loaded up with massive talent and showmen.

Dorothy tells Toto, that they are indeed: "Over The Rainbow", and then the band is right into a frantic version of the then un-released: "Kill The King" that would appear on Rainbow's third album in the following year. "Mistreated" The Purple classic is almost 14 minutes here and this leaves room for Ronnie to scream and scat while Ritchie explores some new and different places for his guitar to travel. "Sixteen Century Greensleeves" is: hard Dark Ages rock music, and again Ritchie is the key here with his amazing playing, this is what Rainbow is all about. The music is a marriage of old & new styles and it is fantastic to hear.

"Catch The Rainbow" could be known as this band's theme song as this epic showcases Ronnie's great vocals and Ritchie's soft and hard playing over the 15 minute ride. In the decade of the 'Big' song, this one was one of the very best of the bunch. Nobody could be dumb enough to cover this song, they would never come close to performance that is captured here.

"Man On The Silver Mountain" is by far Rainbow's most popular tune, and it's all due to that riff. Like: "Smoke On The Water", Ritchie had again created music, that you can't get outta your head. "Silver Mountain" earns the classic stamp of approval.

"Stargazer" should have been titled: "Showstopper", as that is exactly what it was. I saw the group play this amazing piece of music and the explosion alone made it unforgetable, but listen to what they are playing here. This song alone shows just how far head of everybody else this band was in the mid-1970's, another epic, that SHOULD be on every list as one of the best songs of the 1970's. Classic, Classic, Classic.

"Still I'm Sad" is Ritchie's nod to The Yardbirds, the sixties are transported into outer space by Ritchie's playing. I have heard the original version, but this is the way it is supposed to be performed, another execellent track and the closer to Disc Two.

These two CD's show the greatest band of the 1970's on a very good night. These tapes are real and un-doctored, {there ARE bum notes included.} and the sound quality is pretty good for tapes discovered almost three decades after the fact.

Rainbow, was a unique blend of fantasic music that was performed by masters of the art. Deep Purple, was a great group from 1967-1974, but Ritchie heard some different music in his head and this band achieved much more than Purple {not in sales or popularity} but in musical growth, Ritchie, had really moved onwards to another place from what had come before. The music of Rainbow, is nowhere near other music of it's time. Rainbow, was the Godfather of hundreds of groups that would come forth in the 1980's {some good, most bad.} To say that Rainbow was ahead of it's time would be a big understatement. For two years in the Mid-1970's, this WAS the band, The best band...Rainbow, great records and even greater in concert.
Just have a listen.
Philip S. Wolf
Posted by Zen Archer at 4:11:00 AM