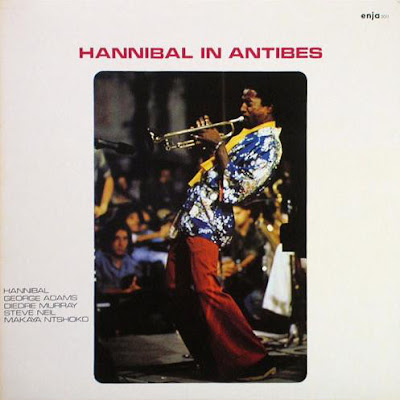 Recorded live at the Antibes Jazz Festival on July 20th, 1977.

An exciting, serpentine solo maker in the mold of Don Cherry -- Peterson has chops but leaves precision to the wind in favor of spontaneous eruptions of melody. Peterson has a more well-rounded technique than Cherry, however, and plays with greater force. Unlike many contemporary free jazz players, Peterson is adept at older styles; he's played under such adventurous yet tradition-bound bandleaders as Rahsaan Roland Kirk, Gil Evans, and Elvin Jones, and with such dyed-in-the-wool avant-gardists as Roswell Rudd, Ken McIntyre, and Deidre Murray.

As a youth, Peterson learned drums and cornet. He attended North Texas State University from 1967-1969 before moving to New York in 1970. That year, he toured the East Coast with Kirk; the next, he joined Evans' orchestra, with which he would continue to play into the '80s. In the early '70s he performed and recorded with a variety of big-name leaders, including Pharoah Sanders, Roy Haynes, and the aforementioned Jones. He also led and played trumpet and koto with the Sunrise Orchestra, a group that included the cellist Murray. Tenor saxophonist George Adams was a frequent collaborator. Peterson has led recording sessions infrequently; his first album was called Children of the Fire, for the defunct Sunrise label (1974). He recorded subsequently for Enja, MPS, and Inner City. Though as a performer he's kept something of a low profile over the years, Peterson -- now known simply as Hannibal -- emerged in the mid-'90s having composed the monumental African Portraits, an orchestral piece that incorporated a jazz quartet, the Chicago Symphony Orchestra (conducted by the eminent composer/conductor Daniel Barenboim), the Morgan State University Choir, the Kennedy-King College Community Chorus, the Doris Ward Workshop Chorale, four operatic singers, various traditional African musicians, and a handful of African-American vocalists. The meticulously composed (and critically hailed) piece differed greatly form the small jazz ensemble contexts with which he had made his professional name. A recorded version was issued by the Teldec label.

Hannibal In Antibes starts off really very badly, so much so that you’re almost tempted to give up on the thing. The problem is it starts with about a three minute drum solo. I mean drum solos are bad enough anywhere on a record, but to start an album with one is just madness. I suppose at least they have started the album with the lowest point on there, so in theory it should only get better from that point on, unless of course you love drum solos. When the other instruments initially kick-in you’re like thank god for that, but then it all starts going a bit pear-shaped and all Tom & Jerry ish. But after about four and a half minutes the bass kicks in, then a cello reveals itself, Hannibal starts blowing the most intense horn work you could ask for, and from that point on you are blessed with a full-on aural pleasure fest for the rest of the album.

This album is two very long tunes that seem to be dominated by solos throughout. Luckily the drum solo is the only bad one here, and as I already pointed out, they got rid of it at the start. All the rest of the solos respectfully work with the rhythm section and never over reach or go too far out. The rhythm section, which also consists of a cello on here, really seems to control the main instruments of trumpet, tenor sax and flute, and make sure they behave themselves. At one point the sax goes a little over the top, but the rhythm section is like calm down will you you’re spoiling the flow, and brings it back into line. The musicians on here are Marvin “Hannibal” Peterson on trumpet, George Adams on flute and tenor sax, Diedre Murray on cello, Steve Neil on Bass and Makaya Ntshoko on drums, and man can this guy can play those drums.

The overall feel of the music is very much in that Impulse spiritual and haunting approach, but with a bit more rock element in there. Imagine the latter Pharoah Sanders recordings for Impulse, like Village Of The Pahroahs and Live At The East, but with a trumpet thrown in, and you’ll kind of get the picture. I also like the use of a string instrument, this is where the rock feel comes from; it kind of adds a slight early Velvet Underground (when John Cale was a member) feel to the thing. In addition to that there’s a kind of eastern feel, but not like Middle Eastern, more sort of eastern European feel. Basically it's a real fusion of styles that all work perfectly, so if you imagine a Russian Velvet Underground without guitars covering a Pharoah Sanders' album, you're almost there.

Both tracks are winners, but side two is a total killer, it’s a twenty plus minute version of “Swing Low Sweet Chariot” that literally abducts you for its entire duration. The drum/bass/cello combination on here is like an all consuming driving riff that just never lets up. I was so taken by this record that I spent the whole twenty minutes just not wanting it to end. I love those times when you've just got an album, but you know absolutely nothing about it and it ends up being one of the best things you've ever heard. If you love all that hypnotic stuff, and strong rhythm sections, then I cannot recommend this album to you enough. Just be warned, it is seriously addictive. The only thing that stops this getting top whack is the drum solo, and that’s just a personal thing, I hate drum solos.
Posted by Zen Archer at 2:24:00 AM