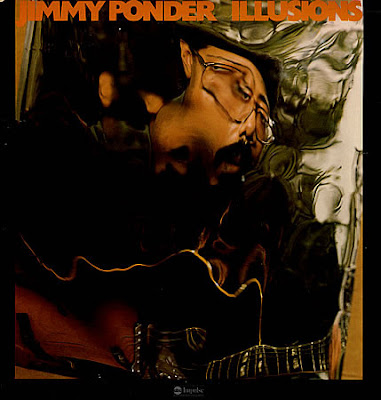 The first track is indeed called "Funky Butt", not "Funky Budd", as can be seen on the label image.

Scanning my record collection for the next subject to feature on the blog, I pondered numerous guitar heroes for the honor. It can be hard to find something that has preferably never been committed to CD publication. I was somewhat surprised to find, from my search of the web, that this 1976 work by Jimmy Ponder appears to fit the bill. I also could not remember when I had last listened to it so when the first couple of minutes of ripping "Funky Butt" came through I was a little dubious as to whether this was worth the effort. As much as I am a huge fan of Boogaloo Joe Jones, Grant Green, Wes Montgomery and many other soulful/pop/jazz guitarists, the late 70's era of politically correct funkified jazz transition had many disappointments in my mind. Even some of the most talented and tasteful of artists suffered through pathetic attempts to contort their natural strengths into commercial success or some failed sense of mid-life crisis. And, as if the name "Funky Butt" wasn't already a pretty good warning, the initial sound here drew a Parliamentary yawn. But slowly I took more notice of the flat out playing of the well known and respected Mr. Ponder, and then the wah-wah magic began to win me over. "Energy III" again flirts with a fusion styled disaster at first listen, but ultimately proves exciting and a nice contrast to the opener. Then the lovely "Jennifer" solidifies my contentment, and so this post makes it here for your own review and opinion. Side two, by the way, follows with a very similar formula of three contrasting songs that are full of Ponder's impressive techniques and general groove. I have to say that the last song, "Sabado Sombrero", is probably my favorite. It brings a variety of stylings where I can hear moments of Wes, Benson and even, dare I say it, Gabor Szabo! Ahhh, this is a winner after all. It also features some simply awesome bass work by the always awesome Ron Carter, relatively simple but beautiful signature playing. You will also notice a good deal of heavy duty keyboard wizardry from another of my soulful jazz favorites, Ron Foster! While on the surface this is clearly more of a contemporary sound with it's special guitar effects and mix of danceable rythms, even though it is now 33 years old, there is truly a diversified composite that includes traditional jazz, soul, funk, rock and pop, all flawless and enjoyable. I pretty much had a hard time not bopping my head throughout, but key for me is that I could really listen to the man's guitar playing, and it brings a smile.
Posted by Zen Archer at 3:13:00 PM