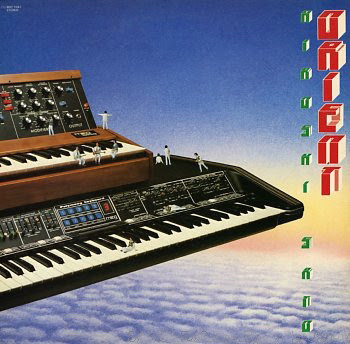 Synth-funk exotica at its finest. Hiroshi Sato (sometimes "Satoh") seems to slip through the cracks, though he was arguably one of the most important Japanese keyboardists of his time. He played keyboards on almost every Tatsuro Yamashita record of the 70s and 80s, and contributed to much of Hosono's solo work, including the beloved Cochin Moon. Unsurprisingly, Hosono makes some appearances here on bass. Sato died in Yokohama on October 24th, 2012. His only daughter, Chirudo, had to say of her father:

His life’s work was pouring his everything enthusiastically into music. He also loved his studio in Yokohama, putting in speakers and installing the equipment and synthesizers one by one. He fell down and breathed his last breath in that studio while he was making music. He was sixty-five years old, and an acute dissecting aneurysm of the aorta was the cause of his death. However, this is the least important aspect of his passing. Despite an instant death, I believe he knew the time had come, because he was sitting cross-legged with his hands joined together, as if practicing Zen meditation. He was alone, but not lonely, because whenever he was surrounded by music he was happy, as if he were an innocent child. He lived life as a musician and lived as a musician with his whole life.
Orient is mostly instrumental, with vocals by Hiroshi Sato and Masaki Ueda on "Son Go Kuw," "Tsuki No Ko No Namae Wa Leo," and "Bright Wind." Cheeky and heady, with immaculate percussion. Lightyears ahead of its time. Thanks for everything, Hiroshi.
Posted by Zen Archer at 7:32:00 PM