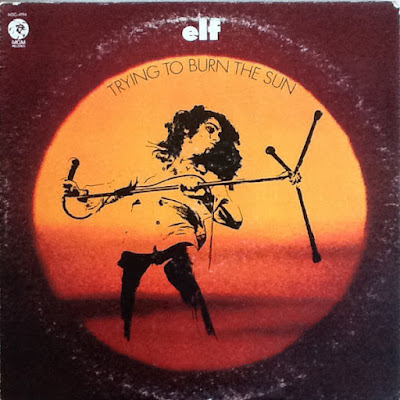 The third and final album from Elf, Trying To Burn The Sun, found the act that would soon morph into Ritchie Blackmore's Rainbow, back on form, the overly diverse, but still good, Carolina County Ball having stretched the band's boundaries a little too far. TTBTS however reined in the less focused elements to deliver a solid heavy rock album still infused with Mickey Lee Soule's piano, but which this time also allowed Steve Edwards' guitar to flourish a little more. Singer Ronnie James Dio, as you'd expect is mighty throughout, a harsher phrasing than before added to his armoury – something that would serve him well as he moved onto Rainbow and subsequently Black Sabbath and Dio. Alongside bassist Craig Gruber and drummer Gary Driscoll, percussionist Mark Nauseef was also added to the line-up, although as he alludes to in the excellent liner notes, he never actually appeared on the album, his contributions confined to the band's stage work.

In terms of sound, Trying To Burn The Sun seems much clearer on the heavy, boogie rock it wants to portray, the piano, guitar and drums of "Shotgun Boogie" great fun but still hard hitting, while "Black Swampy Water" is simply a piece of quality, grooving hard rock. In many ways you can almost feel the band unintentionally auditioning to become Rainbow, a similar feel and groove apparent in this track and "Prentice Wood", where they seem much more willing to really put the foot down. Excellently remastered by Andy Pearce and Matt Wortham, the force of this album's atmosphere is much more readily revealed, while Dio's vocals possess real bite. "Wonderworld" shows a more restrained, tender side to the band, strings heightening the experience as they swoop, soar and sting in equal measure. It's the most mature thing on this album and possibly in the band's catalogue, especially when you factor in an excellent solo from Edwards.

Is curious, but Elf's "Trying to burn the sun" was issued only one month before the first Rainbow album: "Ritchie Blackmore's Rainbow" (mid 1975), personal project of the ex-Deep Purple guitarist, and which featured the same line up of "Trying..." (minus guitarist Steve Edwards, and plus Blackmore of course), ergo Ronnie James Dio on vocals, Mickey Lee Soule on keys, Craig Gruber on bass and Gary Driscoll on the drums.
"Trying to burn the sun" is slightly different to both former Elf albums, it's less boogie-oriented, a bit more climactic, and it's possibly the least known Elf record, in part due to its simultaneous release, almost at the same time with the imposing "Ritchie Blackmore's Rainbow", which obviously eclipsed this album and sentenced it to the obscurity automatically, an ostracism to be redeemed by future generations perhaps.
This album doesn't include the infectious songwriting of "Elf" or especially "Carolina County ball", its songs are not so catchy or compelling, and it's a bit dispersed, even so ain't bad, it's a listenable rock & roll work, including some interesting songs, namely the dreamy "Wonderworld", "When she smiles" or the funky-groovy "Streetwalker", which closed the LP.
Here is when the Elf's story comes to an end, and Ronnie James Dio starts burning the sun for real.
Posted by Zen Archer at 3:08:00 PM