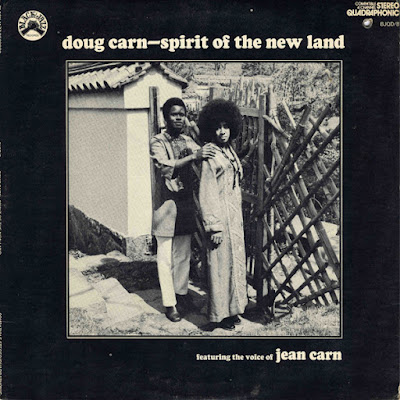 Pianist Doug Carn's second BJ record, Spirit of the New Land, poignantly reflected the state of affairs in black America through explicit lyrics sung by his wife Jean and through the expert musicians' responses to life-altering societal developments in a hopeful time when the slogan Black Power carried real meaningi The album s flush with riveting modern jazz, which often leans toward the spiritually inclined music of the John Coltrane Quartet on the classic album My Favorite Things. With George Harper's flute in gracious agreement, Jean Carn draws beauty out of the Miles Davis ballad "Blue in Green.

First known to the Jazz world as the man who made lyric adaptations for famous instrumental Jazz tunes (such as John Coltrane's A Love Supreme, or Horace Silver's _Peace_; in fact, this album features a vocal version of the Miles Davis classic, Blue in Green), Doug Carn released several albums under his own name in the early seventies on the Black Jazz Records label, one of which is Spirit of the New Land.
Carn plays Jazz organ and the Fender-Rhodes e-piano, and also acoustic piano in a rather McCoy-Tyner-ish way. The record is a document of the lively Jazz scene in the US in the early seventies. The revolutionary developments from the sixties found their way into a lot of the albums recorded then. Think of Herbie Hancock's Mwandishi albums, or Norman Connor's early albums for Buddha Records, and you get an idea of the kind of Jazz on this record. It's part post-Hard Bop, part Free Jazz, part the expression of a universal concern articulately manifested in the Civil rights movement. Those who were seriously involved were searching for new ways of expression. Thus, as far as the aspects of awareness were concerned, Jazz and Soul music were tangent to each other. Jean Carn, Doug's wife, who would have a solo career as a Soul singer later in the seventies, here sings in an uncompromising Jazz environment. Her vocal contributions are more part of the tunes' arrangements rather than the more familiar way where a singer is backed by a band. This is serious music featuring interesting arrangements and solo contributions from these musicians: Doug Carn, keyboards; Jean Carn, vocals; George Harper, soprano sax. , bass clarinet, flute; Charles Tolliver, flugelhorn; Garnett Brown, trombone, Earl Mc Intire, tuba; Henry Franklin, bass; Alphonze Mouzon, drums.
Posted by Zen Archer at 1:19:00 AM