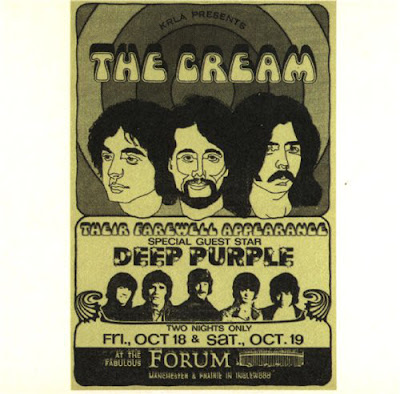 Recorded in Los Angeles on October 18, 1968, as the supporting band for Cream, at their Farewell Tour. One of the very few, if not only, live recordings featuring the Mark I lineup, it was re-released in 2002 on Purple Records.

Tetragrammaton pulled out all the stops to secure Deep Purple a prestigious U.S. live debut on October 18th 1968, opening for Cream on their farewell tour of America at the Forum in Inglewood, California.

For Deep Purple's first live show on American soil they also made a rough black & white video recording to analyse the band's stage performance. Maybe they were was also there to check another recent acquisition, the world's first production-line 'home' sony video equipment 1968video-tape recorder and portable video camera, both introduced by Sony in 1967. The results captured through the camera (equipped only with an awkward turret lens to zoom in) were not at all impressive. Tetragrammaton played back Purple's 50 minute support performance to the group soon afterwards, and no-one could really have learnt much from it. The picture was just a grey fog, with the figures of the band just about visible through the gloom. Whenever they moved the primitive tube technology of the camera caused 'ghosting', which made things even worse.

The good news was that the accompanying audio recording turned out well and that the fifty minute support set also fitted neatly onto a reel of 0.5 inch videotape. Effectively even the audio was still just a superior audience recording however, so when Warners took over Tetragrammaton in 1970, the tape went into the dumpster.. Fortuitously it was rescued, and eventually reached the hands of the DPAS. A poor quality copy also leaked out on a Japanese bootleg cd

Hush heralds the entry of the band, very close to the album version but performed with some vigour and energy, the sound really benefiting from the clean-up afforded to the release. Kentucky Woman is vocally overloaded, Rod Evans struggling to hit the chorus at the end, though the song is well received by the audience. The applause is cut short as the band plow headlong into a slightly discordant Mandrake Root.

Rod certainly sounds well out of place with his crooning voice. Definitely odd after years of living with Gillan's powerful assault. It's extended from the studio cut, though still nowhere near the lengthy excesses of the MkII versions. The track in itself forms an interesting work in progress document, with some close similarities already there with the sections which eventually found their way into Space Truckin'.  Ritchie Blackmore 1968Help is musically tight and energetic though it does again suffer vocally. This is more than counterbalanced by the instrumental assault, Jon letting fly in the middle followed by a pretty truly awful solo by Blackers. The track sounds less tentative than on 'Shades.....', taken faster it is again well received by the crowd who are again cut short in their appreciation by an initially somewhat perfunctory run through of Wring That Neck. Blackers really begins to let fly here, bending the strings all over the place and keeping everything just the right side of total chaos. Paicey is, as ever, the stalwart. This guy has been so consistantly blowing away every other drummer for aeons, and his physical abuse of the drum kit in `68 is still no less restrained these days. Here, though, he drives everything along, holding together the tentative approaches of Ritchie, Jon and Nicky to draw things tighter.

River Deep, Mountain High musically sticks fairly closely to the original. It includes the 2001 theme, though with a distinctly harder edge, lending more weight and leaning further away from the poppier sound of the Book Of Taliesyn original . Rounding the set off is Hey Joe, again it's all there musically, though the sound is a bit thin. Rod really seems out of place here, his chicken in a basket style not gelling at all with the rest of the band. Historically, then, a great artefact and a crucial piece of the live jigsaw. Not a classic Purple performance by any stretch of the imagination, but a unique insight (so far) into the abilities of the band at this stage of it's development.

Now, the audio track has been cleaned up from the original transfer, and released as the second of the 'Sonic Zoom' series of Deep Purple live archive releases. So little evidence of Mk 1's live act remains that the recording is of real historical significance.Regarding the actual sound quality, Purple Records' site mentions that "you soon get used to the ambience, with just a little distortion in the second number and someone in the audience heard near the microphone at one or two quiet moments." It's true enough, and the sound is certainly markedly better than on the bootleg. The hiss has gone (not counting the buzzing of the amps), and there is a sharpness to the recording that was buried on the bootleg. (Being able to hear Ian Paice's cymbal taps counting in the first crashing chord of Hush for starters!) The qualty is easily good enough to make for a pleasurable (and fascinating) listen, great news for anyone who can enjoy a good, clear vintage audience recording of Deep Purple. But if you're expecting hi-fi stereo, or even a miracle clean-up, it would be best to approach with caution. 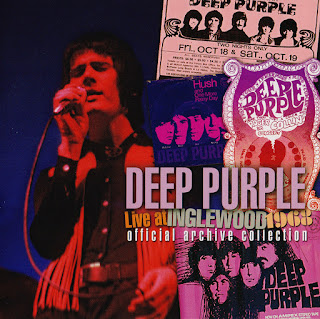 
To the casual fan, it's understandable to assume that the Purple lineup comprised of Ian Gillan, Ritchie Blackmore, Roger Glover, Jon Lord, and Ian Paice was the original, but it was Purple's best-known one, thanks to penning quite a few all-time rock anthems. However, it was not the original. When Purple started out in the late 1960s, it featured singer Rod Evans and bassist Nick Simper (in place of the spots Gillan and Glover would eventually occupy), and was much more of a psychedelic pop act, as evidenced by the lineup's hit, "Hush." And it's this version of Purple that is spotlighted throughout the concert set Live at Inglewood 1968. Riding high from the chart success of "Hush," what better tune to kick things off with than with a rendition of this very track. The vast majority of the tunes here are covers of other groups (including "Kentucky Woman," "Help," "Hey Joe," and "River Deep Mountain High"), and Purple borrows a page from the Vanilla Fudge handbook by completely reworking these covers to the point of not sounding like the original versions. Also featured are a pair of originals, "Mandrake Root" and "Wring That Neck," which would serve as early Purple concert standouts (before the likes of "Highway Star" and "Smoke on the Water" came along). The sound quality may not be as clean and clear as other Purple live albums from over the years, but as a live document of an era that is often skipped over or forgotten in Deep Purple's timeline, Live at Inglewood 1968 will be of interest to die-hard Purple fanatics.
Posted by Zen Archer at 5:19:00 PM