Deep Purple
1968
The Book Of Taliesyn 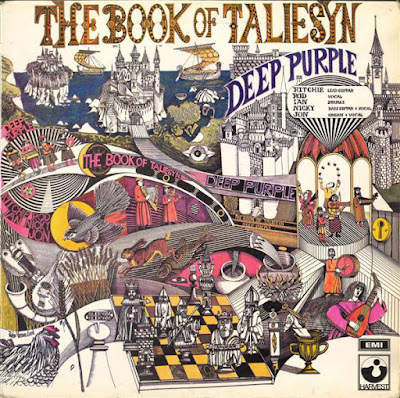 "This has been around for a while in the import shops - you may have noticed John Vemon Lord's excellent sleeve. All the Harvest sleeves are good, in fact, all being gatefolds or whatever you call them.
Some of you may recall, from 1965 or thereabouts, a record by a group called the Outlaws called "Keep a Knockin'." The vocals weren't too amazing but there was some really lunatic guitar playing by Ritchie Blackmore who is now of Deep Purple. The group have done some fine things for Radio One and they excite when they play live - that's why I don't understand where this record went wrong. It is all too restrained somehow.
Each track is well thought and well played but there is no real excitement there. Side one is the weaker side with their American hit, "Kentucky Woman," and a poor version of "We Can Work It Out." Also on this side is "Wring That Neck" which they recorded much better for a recent "Top Gear."      Side two is by far the more interesting side. It opens with "Shield" which is very good indeed - freer and more relaxed than anything else on the LP. The second track on this side is an over-dramatic "Anthem." Perhaps the best thing about the group is their sense of dynamics and their ability to lead into familiar themes with unfamiliar and beautifully constructed instrumentals. This is demonstrated in "River Deep-Mountain High" which closes this slightly disappointing album."
review: John Peel
(Disc & Music Echo, June 7th 1969) 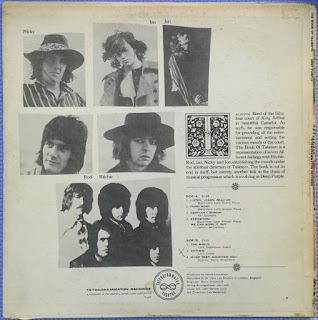 Alternate rear cover of US edition

Several months after the innovative remake of "You Keep Me Hanging On," England's answer to Vanilla Fudge was this early version of Deep Purple, which featured vocalist Rod Evans, and bassist Nick Simper, along with mainstays Ritchie Blackmore, Jon Lord, and Ian Paice. This, their second album, followed on the heels of "Hush," a dynamic arrangement of a Joe South tune, far removed from the flavor of one of his own hits, "Walk a Mile in My Shoes." Four months later, this album's cover of Neil Diamond's Top 25, 1967 gem "Kentucky Woman," went Top 40 for Deep Purple. Also like Vanilla Fudge, the group's own originals were creative, thought-provoking, but not nearly as interesting as their take on cover tunes. Vanilla Fudge did "Eleanor Rigby," and Deep Purple respond by going inside "We Can Work It Out" -- it falls out of nowhere after the progressive rock jam "Exposition," Ritchie Blackmore's leads zipping in between Rod Evans smooth and precise vocals. As Vanilla Fudge was progressively leaning more towards psychedelia, here Deep Purple are the opposite. The boys claim to be inspired by the Bard of King Arthur's court in Camelot, Taliesyn. John Vernon Lord, under the art direction of Les Weisbrich, paints a superb wonderland on the album jacket, equal to the madness of Hieronymous Bosch's cover painting used for the third album. Originals "The Shield" and "Anthem" make early Syd Barrett Pink Floyd appear punk in comparison. Novel sounds are aided by Lord's dominating keyboards, a signature of this group.
Though "The Anthem" is more intriguing than the heavy metal thunder of Machine Head, it is overwhelmed by the majesty of their "River Deep, Mountain High" cover, definitely not the inspiration for the Supremes and Four Tops 1971 hit version. By the time 1972 came around, Deep Purple immersed themselves in dumb lyrics, unforgettable riffs, and a huge presence, much like Black Sabbath. The evolution from progressive to hard rock was complete, but a combination of what they did here -- words that mattered matched by innovative musical passages -- would have been a more pleasing combination. Vanilla Fudge would cut Donovan's "Season of the Witch," Deep Purple followed this album by covering his "Lalena"; both bands abandoned the rewrites their fans found so fascinating. Rod Evans' voice was subtle enough to take "River Deep, Mountain High" to places Ian Gillan might have demolished.
Posted by Zen Archer at 5:07:00 PM