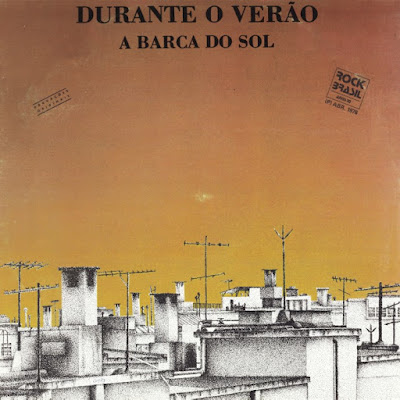 
I knew this album existed since the beginning of the recorded times but I had never the opportunity to listen to it until a couple of years ago. 30 years of good moments lost in the dust of time! Well, for my comfort, it's good to know that I'm still ready to hear it as long as I wish from now on. Great! A BARCA DO SOL "Durante O Verão" is a really a great album and worth the price and the hearing. However, it's tough to transcribe into words of a different language so many references easy to be picked up by a Brazilian or for some foreigner that lived here time enough to understand clearly all hidden subjects, all cryptic issues, all delicious puzzles. I'll try to do my best, maybe it'll work.
Here A BARCA DO SOL dived deeply into the folk spectrum, this time adding general Latin American spices to the notorious Brazilian substrate - a dangerous feature since this mixing may border confusion but in the end the band knew how to manage it. Noticeable are the flow of odd instruments, sound effects and lengthy singing parts (in Portuguese) but vocals are soft and acceptable even if one doesn't catch the language and the weird tunes are mainly incidental not spoiling the overall good atmosphere. Anyway, Morelenbaum's cello dominates the scene almost all the time.

From the different tracks presented, the mini-epic 'Hotel Colonial' deserves a special look not only for being the best album track but for the story it keeps; the song does reference to two other classical Brazilian popular songs: 'Luar do sertão' and 'Chão de estrelas', both clearly impregnated in the soul of each citizen hereunder the Equator (well, at least for those that were born before 1970). The intro is sampled from the first of the mentioned songs while lyrics run referring to the second. Subtly observed are some touches of classical composer Heitor Villa-Lobos in the background. Middle section brings weird and interesting drumming action challenged by exalted violin backing, all finishing with an uplifting flute solo accompanied by a massive instrumental work. Quaint and beautiful at the same time.

'Durante o verão', the opening track is warm and gentle: fine lyrics, fair arrangement and fancy vocals. 'A língua e a bainha' is poignant and dreamy, provided with majestic fingered guitars and somber ambience. 'Os pilares da cultura' completes the album's first half with a neat hard melody and frantic vocals - A BARCA DO SOL rock face is displayed con gusto here. 'Karen' is short and serene, a fair intermezzo.

'Memorial Day' initiates the album's second half with a blatant space rock air, reminiscent of Pink Floyd while the rest is a collage of the band's own sounds, nicely disposed. 'Banquete' is clean and exquisite showing band's romantic side and again full of references now related to Beatles and singer Milton Nascimento. The 'Eleanor Rigby' samples are decorated with classical and folk delightful aromas. 'Belladona, Lady of the rocks' the longest song here, is sung in Portuguese in spite the English title and it's the track where the A BARCA DO SOL present their most experimental portion. 'Outros carnavais' ends the album like a flurry of a furious and fierce folk festival - funny and fantastic.

What to say? Another hidden gem lost in a shelf of distant and pleasant times - so difficult to get, so hard to find. But do not hesitate, seeing "Durante O Verão" go and grab it since it's an excellent addition to any music collection.
Posted by Zen Archer at 11:52:00 PM

Email ThisBlogThis!Share to TwitterShare to FacebookShare to Pinterest
Labels: A Barca do Sol, Brasil