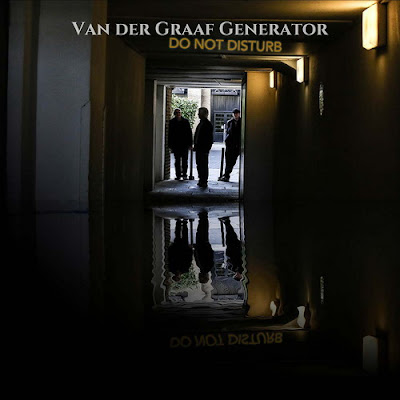 
Is this VDGG's final act? I would be very surprised if this isn't their last studio album, especially with how reflective this album is and the lyrics seem to point to this. I think for me that's part of my faults with this record as it comes across almost like a dirge overall with the vocals being the focus much of the time. Some have said this is more like a Peter Hammill solo album which I can appreciate. On the final track "Go" Peter sings "Time to leave, close the door" and it ends with these final words "It's time to let go" and I have to say this is a sad record, it really is. Of course even the album's title and cover indicate retirement.
David Jackson is not here so they're a trio like on the last album. They have added a lot of complex passages despite how reflective this often is which is why I picked this up in the first place, I was curious. "Present" was their first comeback album and by far my favourite of this last period of the band. I also have to say that there's a line in the song "Alfa Berlina" that for me sums up why so many bands from the golden era fail to make anything close to what they did when they were young and those words are "But when I think about the way it was we were recklessly alive." That fire and passion of youth and just starting out can't be bottled or bought and it's rare, really rare to see in an older band.

"Aloft" and the next track are my two favourites. This starts out as one of those reflective songs as fragile vocals join the relaxed guitar and cymbal melody a minute in. A change though after 2 1/2 minutes as it picks up with organ, accordion, drums and vocals. A third theme arrives that's nastier and more passionate. That second theme is back at 4 1/2 minutes before the opening theme returns to end it at 6 1/2 minutes. An inventive tune. "Alfa Berlina" is experimental to start with lots of samples. Spoken vocals in atmosphere will take over before we get the main melody before 1 1/2 minutes. The lyrics are so meaningful. A change 4 minutes in as it turns experimental and sparse again and the spoken vocals return like earlier. Back to the main melody a minute later. "Room 1210" is mellow with piano, cymbals and reserved vocals. Accordion and drums join in as well. It kicks in before 1 1/2 minutes with a brighter mood. It continues to change though as it calms down after 3 1/2 minutes.

"Forever Falling" is one I can't get into. A catchy beat to start as the vocals join in. The vocals are faster paced 2 minutes in as is the punchy instrumental work. Back to that opening theme before 4 minutes to the end. "Shikata Ga Nai" is almost haunting, kind of exotic too while a chamber music vibe is felt in this dark piece. "(Oh No! I Must Have Said)Yes" is one I can't get into with that abrasive sound with heavy drums. It changes though to a surprising jazzy motif before 3 minutes but then this abrasive guitar starts to come and go over top that I don't like. "Brought To Book" is mellow with a beat, piano and reserved vocals. Organ and drums arrive as it picks up around 2 minutes, vocals too. Back to the opening theme a minute later then it kicks in to a higher gear but the tempo will continue to shift.

"Almost The Words" is a sad dirge-like tune with sad vocals, piano, percussion and atmosphere. A change at 4 1/2 minutes as fast paced keys and drums take over as multi-vocals come in over top. The organ kicks in before 6 1/2 minutes with prominent bass and drums. I want more of this last part because I feel that's what's missing here and these guys can deliver but I think it's more about the farewell. And speaking of farewell the final song is "Go" which opens with spacey organ and sounds before these fragile vocals join in around a minute.

A sad and reflective album that doesn't scratch that itch for me but it comes across as being a must-have considering the circumstances.
Posted by Zen Archer at 8:50:00 PM