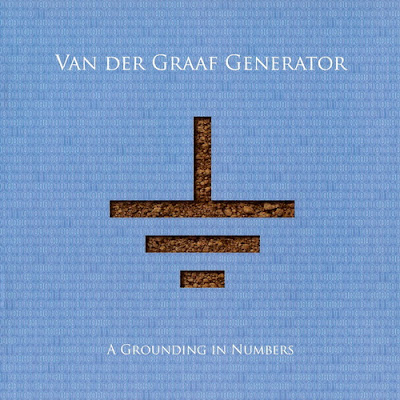 
Over two years after the release of the fabulous Trisector, VDGG returns with another batch of tracks written and recorded as a trio. Well after the excellent surprise of Trisector, the three compadres were going to have a tough time equalling or topping their previous effort, but then again the Generator always pull up aces from their sleeves when they need to. The least we can say is that A Grounding In Numbers is another worthy album despite the relatively (read too) sober artwork (well the vinyl features a cut-out) and the continued trend to avoid the famous logo.
After a strong Your Time Starts Now (but not equalling the previous openers like Bloody Emperor and Interference Pattern), the album flips to the unofficial title track, dealing with an artificial (IMHO) concept about numbers and maths. Some might consider this "theme" a stroke of genius, but I can't help but thinking that Hammill might have had nothing stronger a thought to deliver to us at the time of writing and recording the album. Musically, the track is a small tour de force, but the weak lyrics bug me. Some tracks (a fair bit actually) are in the fairly basic (and disappointing) verse-chorus mode (well the usual VDGG complexity aside) with a short solo, like Highly Strung, which could've been AC/Roxy/DC-like with an almost tasteless chorus line, if you get my drift. Later on the album, Embarrassing Kid and Mr Sands are made from the same mould and Smoke has an almost new-wave/electro-pop sound (which I really don't think appropriate for them) and segues into another early-80's-ish track, 5533, which sounds a bit like the Talking Heads with a return to the math theme.

There are some brilliant interludes (but not enough, IMHO), which allow for some breathing space, like the haunting instrumental Red Baron (Evans' awesome drumming), duly separating the violent Highly Strung from Bunsho, a quieter track, which seems to evolve from the Baron's descent, and where Peter deals out a decent guitar and very personal lyrics about his creation process. The challenging Snake Oil features a slow crescendo, some abrupt dynamics and then leaves the floor another instrumental interlude Splink, which is definitely not as successful and features some clunky harpsichord over those wild drums of Guy. The album closes on the longest (barely 6-mins) All Over The Place, with Hammill all over the harpsichord and the band finally unleashing mean solos to arouse our intellect. Too little too late, though. I'd love to have received as a bonus the non-album B-side instrumental piece to have taken the place of say that Embarrassing Kid song.

Well if Trisector was quite a successful album that seemed to be over too quickly, I can't really say the same of AGIN, which tends to add up a bunch of fairly similar tracks (despite all having their own life), thus bringing a certain kind of fatigue around the 4/5th of the album. Indeed, what was clicking so well on the previous album was that the longer tracks provided breathing space and more instrumental interplay and moody ambiances. Here, the shorter song format (only four above the 5-mins mark) seems to hamper the song contents to deepen and explore their own soul to the fullest. Don't get me wrong, AGIN is still a very worthy Generator effort, but it won't retain its brilliance as long as its predecessor.
Posted by Zen Archer at 6:31:00 PM