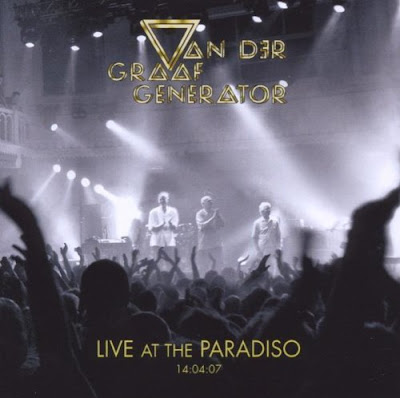 This show was held in my adoptive hometown, and it was one of the darkest most violent shows I have ever attended, the air was electric and menace was in the air, like a punk show in the early 80's... Memorable Night!

This recording of a performance from pre-album touring for Trisector doesn't just show that the band would weather the loss of Jackson; it shows that, at this point, they were a vastly superior band without him. Lest someone accuse me of blasphemy, I'll emphasize the at this point in that sentence; it's impossible to imagine the 70s version of the band thriving and making a strong mark without Jackson's noisy woodwinds, especially given the relative lack of guitar on those albums. When the classic quartet reunited for Present and accompanying live performances (like the one on Real Time), though, they essentially became a touring museum piece, which wouldn't have been so problematic if Hammill's vocals didn't sound so out-of-place worn and old. When Jackson departed and the other three decided to carry on, this didn't just require them to find a new approach to take on any new studio material they might do; this required them to reinvent their performances of their classic material in a way that would still preserve their essence without exposing the potentially gaping void in the sound. This process of reinvention gives a spark and a life to these performances that I didn't expect coming in, and it helps make for a really enjoyable live album.
Instrumentally, the main trick of the band is for Hammill's guitar to take a more central role than before, with his parts sometimes mimicking Jackson's old woodwind parts, and sometimes providing a level of noisy chaos that matches the general chaos Jackson's parts had provided. In terms of vocals, Hammill doesn't actually sound any better in tone and approach here than he does on Real Time, but the key here is to fill the setlist with material that doesn't require the kind of delicacy that he couldn't really provide in upper registers anymore. The only quiet ballads of the set are "Lifetime" (from Trisector) and "Every Bloody Emperor," and they're low-key enough (except for some angry moments near the end of the latter) and in a low enough register that there aren't any problems to deal with. The rest of the album consists of the kind of noisy material that is only helped by Peter's yelps and growls and half-singing. Plus, forcing Peter into a lower register has a major positive effect on one track: "Gog," from Peter's In Camera album, always seemed a little awkwardly pompous to me with Peter singing in the angelic higher range of his youth, but in a lower voice, the opening line of, "Some men have me Satan, others have me God..." suddenly becomes menacing as hell, and his voice generally gives a heft that wasn't present in the original.

The album has a lot of good material, but the major highlights come from World Record. Both "Place to Survive" (10 minutes to 7 minutes) and "Meurglys III" (20+ minutes to 16) are slightly abbreviated from before, but the shortening isn't really noticable, and they both exemplify all of the best aspects of the "power trio" VDGG. Trust me, you won't miss the saxes; the guitars give a dirty and sloppy edge that had always been slightly present in the studio versions but now become one of the best parts of the songs.

Look, this isn't one of the very best live albums I've ever heard (whatever weaknesses were in the studio versions of these tracks don't suddenly disappear completely), but it's definitely one of the most shockingly revelatory live albums I've ever heard. One thing I always hope for from a live album is for a few sonic surprises (which this album definitely has) and a few renditions of tracks that will make a case for being my favorite rendition of that track (aside from these being my preferred versions of the two World Record tracks, this also has my favorite "Lemmings" and my favorite "Scorched Earth"). If you're a fan of the band and you're not a diehard Jackson fan who refuses to acknowledge anything from after he left, you absolutely must get this album. More than anything else from this era, it cements late-period VDGG as having one of the very best late-period stages of any significant prog rock band.
Posted by Zen Archer at 6:28:00 PM