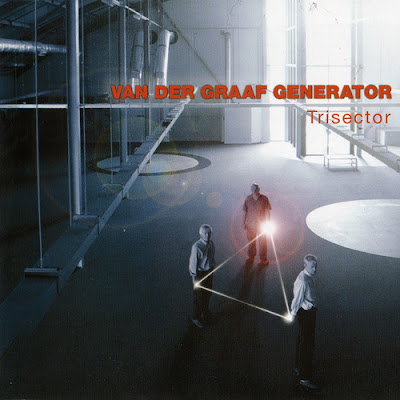 
Van Der Graaf Generator reformed for the second time to make Present in 2005, and since then Jackson has jumped ship for the second time. On the previous occasion that this happened VDGG recruited a violinist and welcomed erstwhile bassist Nic Potter back into the fold; the resulting album, The Quiet Zone/The Pleasure Dome was generally considered a disappointment when it was released but has stood the test of time rather well. This time around the core members have decided to continue as a trio, and the resulting album is perhaps less immediate but deeper and more coherent than Present.

Trisector sees a number of changes for the band, some more obvious than others. The three piece VDGG has something of a keyboard dominated sound, although Hammill's distinctly non virtuoso guitar gets a more than adequate airing, and comparatively short songs are the order of the day. All but one of the nine tracks is credited to Banton/Evans/Hammill, the first time that group songwriting has dominated a VDGG album, and the overall mood and sound is relatively low key and gloomy, perhaps due to the church organ sound that Banton favours for many of the songs. They toured as a three piece before this was recorded, and they are clearly relaxed and confident in their stripped down format. But is it any good? The answer is a definite, though not unqualified, yes. The writing and arrangements are tight and focused, the musicians demonstrate a spellbinding interplay and the album's high points are well up to their extremely high standards.

There are a few weak spots; the instrumental opener The Hurlyburly would have been twice as effective if it had been two minutes long instead of four and half, and there are passages where Hammill adds some lead guitar and the absence of Jackson's sax is really noticeable . On Drop Dead it sounds as though Hammill's old alter ego Rikki Nadir has briefly taken over the proceedings - it will probably work superbly in concert, but the clodhopping beat rather disrupts the flow of the album.

The best tracks more than make up for the weaker moments, though. Only In a Whisper is a jazz tinged number featuring Hammill on Fender Rhodes and Banton on bass guitar, with splendidly restrained vocals and featherlight dumming. It's a beautifully understated performance from a band that has never shied away from the grand gesture, and all the more effective for it. All That Before is an uptempo rocker that really hits home, and Hammill's rhythm guitar playing beefs things up to great effect. The centrepiece of the album is the epic Over the Hill, which is everything an old school prog fan could wish for; time changes galore, constantly shifting moods and tempi and a bravura vocal performance of some suitably oblique lyrics which could refer the history of VDGG or Hammill's own existential turmoil. Prog rock doesn't get much better than this in any era or sub genre.

Following the triumph of Present and the subsequent live shows it seemed that VDGG had nothing left to prove, but Trisector demonstrates that they've still got everything to play for. Banton and Evans have rarely sounded better, and they provide some of the best settings ever for Hammill's voice and lyrics. Trisector isn't Pawn Hearts or Godbluff, but it isn't trying to be, which is probably its greatest strength.
Posted by Zen Archer at 6:05:00 PM