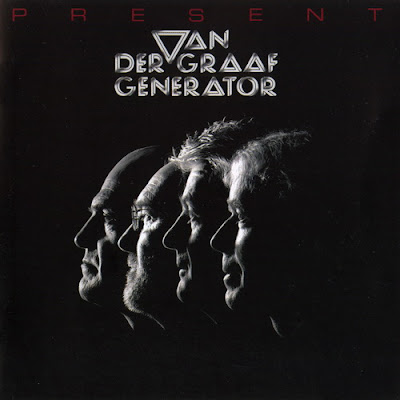 
Van der Graaf Generator returned with "Present", this 2005 album, that comes after the final studio album in 1977. It was a long hiatus and one may have been forgiven for assuming that the band would have become stale or lost their prog roots and ultimate weirdness, of course great bands like this will always provide something very special. They are definitely back and are as progressive as ever. The line up is such a nice surprise featuring of course visionary genius Peter Hammill on lead vocals, guitar and piano, and he is joined by the big three; Guy Evans on percussion, Hugh Banton on organs, piano, Mellotron, bass pedal/guitar, synthesizer and the biggest treasure for me, is the return of the extraordinary David Jackson on saxophone. The sax was absent on the last few studio releases so it was a terrific addition to include it here.

'Every Bloody Emperor' kicks it off well and sounds like vintage VDGG with that cool sax, and Hammill's vindictive serious vocals. Even the lyrics have that distinct VDGG style. This is followed by a wonderful dreamy sax and measured tempo on the instrumental 'Boleas Panic' that is kind of slow and haunting.

A highlight is definitely 'Nutter Alert' that pretty well sums up this eclectic music. It has a moderate tempo sax driven time sig, and some Dracula organ, providing a trademark VDGG sound. The lyrics are typical Hammill such as "is it the pricking of the conscious, is it the itching of hair shirt, is it the dictionary definition, of a precipice to skirt?, It's the nutter alert." I love the instrumental break with grinding keyboards, and the time sig is a progger's delight. Jackson is delightful as he blasts out a sax inferno in the freak out of organ phrases and off sync percussion. Hammill sums it up beautifully, "You're a car crash in the making, head-on, that's a racing cert, It's the nutter alert".

'Abandon Ship!' is a lot of fun and has the same type of thematic content as 'A Plague of Lighthouse Keepers'. It has a scratchy raw guitar riff and this is joined by sax and organ blasts over the odd meter of drumming. The lyrics are the kind that can only be found on a VDGG album. Who the heck would use the words "Oh, the heptagenarians got behind the decks, while the skeleton crew went through the motions, it was only the medication that was keeping them erect, Yeah, the devil got the best tunes so god knows what comes next." The sig goes all over the place in a kind of jazz meltdown, with sax coming in impromptu outbursts and very bizarre drum beats over hectic keyboard phrases. This is a sheer delight, as quirky as the band gets; they certainly have not lost their quirkiness and unbridled charm. When Hammill yells "Abandon Ship!" he is not kidding!

'In Babelsberg' follows on, a rather messy track with too many Hammill vocals before we are finally released into some punked up guitar and off kilter sax and organ. Again I love the sax sound and the way the song builds into a steady pace with some hi hat work and cymbal splashes. It actually sounds as though two separate songs are being played together at one stage, with sax competing against the other instruments, but that's the way we love our VDGG; served up chilling and cold with unpredictable fractured signatures and arrangements.

'On the Beach' ends it with a 6:48 composition, that includes some studio banter that is kind of cool to hear in the intro; "a cross between cool jazz and surfing safari, it has that kind of sinister vibe". Hey, who's reviewing this album anyway? When the band shut up it moves into a minimal organ and a Hammillian piece of reflection, a nice part of the VDGG repertoire. The squeaky sax is nice and the lyrics "even the Silver Surfer agrees" is a cool touch for comic fans. A weird low key way to end this album but nevertheless a very pleasant journey.

CD Two is VDGG 'IMPROVISATIONS' where we can listen for just over an hour to some of the studio improvs and sound check kanoodling of the band that ranges from okay to fair to awful, but it is only a bonus and if treated as such it is a nice way to spend an afternoon. Similar to the improvs unleased on "Time Vaults", there are some really weird oddities here including the sax and organ battle on 'Vulcan Meld' that clocks 7 minutes and features waves on the beach effects that are soothing to the senses and augment the music very well. There are lot of ideas scattered in the sound and it could be aptly described as swinging jazz math rock mixed with eclectic avant RIO.

'Double Bass' has a nice synth run and a funky bass with some spacey squelches and an incessant drum improv sig. I like the sax and the way it builds to a free form swing, the band obviously enjoying themselves with a few "ooh yeahs" thrown in. The melody kind of sounds familiar as though from "Godbluff" but I can't place it.

'Architectural Hair' is a heavy repetitive thing numbing your ears for about 9 minutes, if you can endure it. 'Eavy Mate' is kind of fun nonsense that fades up mid way through with sax squeaks and squawks and scattered percussion. It is just the band unleashing their instruments and occasionally it sounds as though they are melding together to form some semblance of a song.

'Spanner' is a drummer's paradise and has some chilling sax. 'Crux' is a slow tempo piece with a raw recording sound and delightful sax, and guitar strums. The sound is more together than other tracks and works as a pleasant instrumental. 'Manuelle' is grinding keyboards that irritate after a while but it is nice the way the drums and sax build over. It sounds a lot like 'Meurglys III' from "World Record" when this lineup was last heard. Once again it is too lengthy without any vocals and no actual melody to lock into.

The absence of Hammill's vocals is not a very welcome aspect as it his vocals that carries most of the best VDGG songs. None of the tunes are memorable and feel like a very rushed afterthought, and only with tinges of inspirational genius. Tracks such as 'Slo Moves' that overstays its welcome by about 4 minutes are dull, and a lot of this music is really crying out for some kind of lyric or at the very least a melody. 'Homage To Teo' is another weird one with no meter and just a lot of sax and avant garde sounds; perhaps some may call this genius, bit I can't hear it without wanting it to end. 'The Price of Admission' is a 9 minutes snorefest of noisy avant RIO and capped off with waves crashing. It is more of a curio then a true document of the band at their best. I guess I feel more like a fly on the wall in a studio being privy to hearing the raw unfinished material, that perhaps should have never seen the light of day. But it is still interesting to hear what these genius's get up to at work while us mere mortals are occupying our time trying to make ends meet.

This bonus CD was included on the special edition but not on others and comes across as unnecessary at times, and is one CD I won't return to often, however it is far superior to the latest 2012 "ALT" album that is all improvisation and sold off as an actual album, which is really unforgiveable. In any case "Present" is a satisfactory album that has been surpassed since by "A Grounding in Numbers", and it is well worth seeking out for VDGG addicts, of which I am one. It is great to see these visionary progenitors of prog back, recording new material when we were all under the impression they had finished long ago.
Posted by Zen Archer at 5:21:00 PM