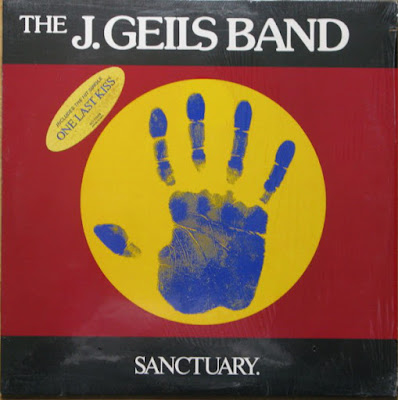 
After the release of 1977's Monkey Island, the J. Geils Band severed ties with Atlantic and signed a fresh deal with EMI Records. The band's tenure with Atlantic only yielded a few successes, and on paper, teaming up with producer Joe Wissert, the man responsible for many of Earth, Wind & Fire's and Boz Scaggs' biggest hits, seemed like an odd choice. However, Sanctuary was a rebirth of sorts for the sextet: Wissert crystallized the band's attack, working off their leaner songwriting and simplifying their arrangements. Keeping their boogie-woogie bar band attack intact, Peter Wolf and Seth Justman delivered first-rate material, including the down and dirty opener "I Could Hurt You," the sublime title track and the lovely "One Last Kiss," which cracked the Top 40 in early 1978. The Stevie Wonder-ish "Take It Back," also a mild hit, predicted the commercial direction the band took on Freeze Frame three years later. The beautiful "Teresa," a heartbreaking ballad executed with help of a simple vocal/piano arrangement courtesy of the Wolf/Justman team, and "Wild Man,," which sounds like a leftover from the Atlantic years, are also highlights. Sanctuary's final song, the rollicking, Magic Dick-driven "Just Can't Stop Me," encapsulates everything magical (pun intended) and soulful about this band. With its effortless playing and a breakdown that'll have you on the edge of your seat, it served as the band's call into battle for the Freeze Frame tour. The Razor & Tie reissue features covers of "I Do" and "Land of a Thousand Dances" from the band's live record Showtime, recorded at the height of their Freeze Frame period. "Land of a Thousand Dances" in particular reminds you just how incredible these guys were live.
Posted by Zen Archer at 12:10:00 AM