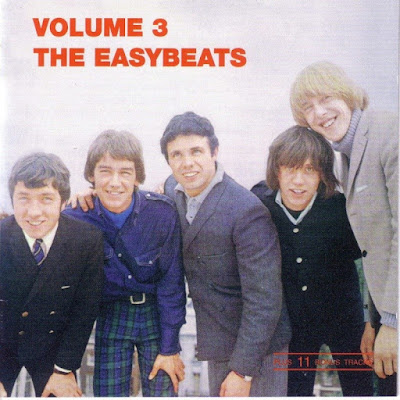 1966's Volume 3 was the last album the Easybeats recorded in Australia before heading to England in hopes of conquering the pop world; by this time they were firmly established as Australia's most popular group, and while Volume 3 doesn't quite sound like a band going through the motions, it also suggests they'd accomplished as much as they were likely to with producer Ted Albert and the songwriting team of Little Stevie Wright and George Young. (Significantly, Harry Vanda would come into the forefront as Young's songwriting partner on their next album, Friday on My Mind). But if Volume 3 doesn't capture the Easybeats at their very best, it hardly disappoints; opening with the tough, R&B flavored "Sorry," the album moves through expressive love songs ("Say You Want Me" and "Dance of the Lovers"), tough rockers ("You Said That" and "Not in Love with You"), Beatles-styled smart pop ("Promised Things" and "The Last Day of May") and hard-stomping dance tunes ("My My My") with confidence and aplomb over the course of its 13 tracks. Stevie Wright demonstrates his chops as one of the strongest and most versatile vocalists of the British Invasion era, and guitarists Harry Vanda and George Young cut through these songs with an aggressive strength that put most of their peers to shame. One could argue that Volume 3 is the Easybeats' relative equivalent to Beatles for Sale -- a few notches below their usual standards, but still great rock roll for anyone with a passion for the pre-psychedelic era. [Repertoire's 2006 reissue of Volume 3 adds an impressive eleven bonus tracks to the package. Five come from the Easybeats' first recording session and find them in stiff but engaging form, while most of the rest are odds and ends from their later session with Shel Talmy; "Do You Have a Soul" is outstanding, but the latter-day studio construction "The Easybeats Medley" is best avoided by anyone who cares about this group, or music in general.
Posted by Zen Archer at 4:02:00 PM

Email ThisBlogThis!Share to TwitterShare to FacebookShare to Pinterest
Labels: Australia, The Easybeats