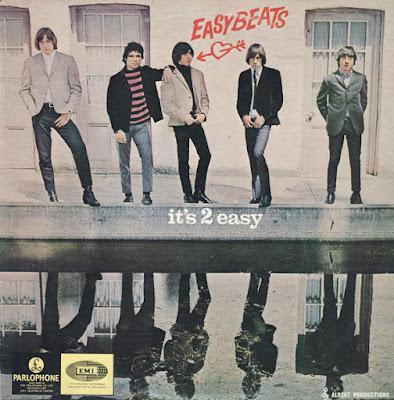 
The Easybeats' second album was an Australia-only release that only got out elsewhere 27 years later. It was vaguely similar in spots to the band's first -- many of the songs, particularly the hits "Women" and "Sad and Lonely and Blue," were heavily influenced by 1964-vintage Merseybeat groups. Those songs are somewhat deceptive, however, for the group was stretching out stylistically on much of It's 2 Easy. Sharing space with bright, heavily harmonized numbers like "Let Me Be" and "You Are the Light" is a string of songs integrating elements of blues, folk, and even a certain novelty feel, similar to the work of the Kinks. "Come and See Her" and "I'll Find Somebody to Take Your Place" abandon those Beatlesesque melodies in favor of dissonances and a punk attitude. Featuring some gloriously crisp and slashing lead guitar over pleasantly crunchy rhythm playing, "Easy as Can Be" is a catchy, loud, fiercely posturing declaration of lust that could almost pass for a piece of American garage rock.
Most of this album is a respectable piece of mainstream rock & roll, inspired and full of surprises. With the addition of 11 more songs, the original LP has been expanded to 25 tracks and 62 minutes' running time. The added tunes are an uneven lot, derived from various singles, B-sides, and other sources. Some of it is rather lugubrious, but none of it detracts from the value of the original album, which remains one of the best bodies of music in the late British invasion style ever produced.
Posted by Zen Archer at 3:58:00 PM

Email ThisBlogThis!Share to TwitterShare to FacebookShare to Pinterest
Labels: Australia, The Easybeats