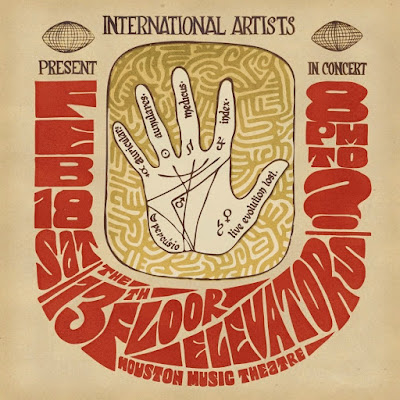 Live Evolution Lost: The 13th Floor Elevators Live at the Houston Music Theatre is the first ever release of the complete performance of the band's legendary show in Houston on 18th February 1967.


Let's talk about the presentation first as it's not every day that such a lavish box of colourfully presented psychedelic and mystic grooviness makes itself physically known. The cover itself is like one of these magnetic tape reel boxes as used by recording studios, and here they've stuffed it full of goodness: a giant reproduction poster of the Houston Music Theater gig from whence the actual audio tracks on the grooves originate, a cool photo and memorabilia-packed book with yet another essay lovingly put together by ace chronicler Paul Drummond, and a tasty trio of individually wrapped coloured vinyl records: pressed up in red, green and blue.
Actually, however , there are only five sides of music come to think of it as the sixth side - on the red vinyl - is like an etched out affair embossed with one of the images from the poster; the hand with captions etc... Some, or most of these sounds are already known to many long-term fans of the Elevators; a few were also included on the super-surreal "Sign Of The Three-Eyed Men" CD, and later vinyl, box sets. The actual concert itself took place on 18th February 1967 and would mark the end of an era for the original Elevators line up of John Ike Walton, drums, Bennie Thurman, bass, Tommy Hall, electric jug and backing vocals, Stacy Sutherland, lead guitar and Roky Erickson, rhythm guitar and lead vocals. On this particular occasion too they were also joined by the Conqueroo - and, collectively, are the owners of some pretty long jam-outs that are peppered throughout.

Psychedelic pioneers the 13th Floor Elevators had a sterling reputation as a live act during their years in Austin, Texas, but there are only a few scraps of recorded evidence to back up the legend of the Elevators' fiery shows. Tapes exist of early radio and television performances by the band, and an oft-bootlegged 1966 show at San Francisco's Avalon Ballroom captured them at the height of their powers, but the Elevators' lone attempt at a live album was well short of a success. International Artists Records arranged for a remote crew to record the group's February 18, 1967 show at the Houston Music Theater, but as was their habit, most of the bandmembers dropped acid before the gig so they would be tripping once they hit the stage; the LSD was more powerful than expected, and guitarist Stacy Sutherland suffered a very bad trip. As he described it in an interview, Sutherland imagined "All of a sudden, here was a vision in light that we were wolves and we were spreading drugs and Satanism into the world and I never realized it because of an Antichrist influence...I couldn't talk to Tommy (Hall) or Roky (Erickson) that night, see, because they were the wolves. I was a wolf, too." As you might expect, the opening number, "(I've Got) Levitation," was a shambles, as were several other tunes that evening, and while the bandmembers found their footing later that night, the show was a severe disappointment and IA shelved the tapes. Live Evolution Lost marks the first authorized release of the complete Houston Music Theater recordings, and ultimately the show is better than its reputation, but only by so much. Sutherland wasn't the only performer having trouble that night, as Roky Erickson often either forgets vocals or neglects to sing into the mike, and the chemical troubles and uncomfortable vibe of the large venue seem to throw the Elevators off their stride, as this show lacks the taut energy and keen focus of the Avalon Ballroom tapes. Drummer John Ike Walton, however, works hard to keep the band on track and wins the MVP trophy for the night, and despite his condition, Sutherland reels out a few impressive solos when he can collect himself. And when the pieces fall into place on "Reverberation (Doubt)" and "Roller Coaster," the band impresses despite it all. Along with the Elevators' 11-song set, Live Evolution Lost includes a 40-minute jam session between the Elevators and Conqueroo, friends of the group who opened the show, and like most open-ended jams, the performances tend to meander and are mostly of interest to hardcore fans. Since it's one of the only professionally recorded 13th Floor Elevators shows in circulation,