Second Hand
1971
Death May Be Your Santa Claus 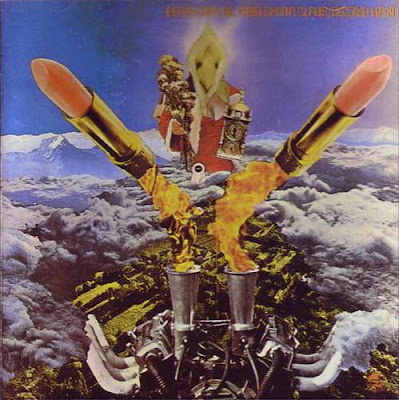 
I read somewhere that SECOND HAND named their album "Death May Be Your Santa Claus" after hearing about the underground film with the same name which was made by none other than Frankie Dymon Jr who is on this site for his music. Man this is one strange album that touches on Avant-Garde, Symphonic and Psychedelic music. There is a strong Proto-Prog vibe here(tons of organ) and the singer Rob Elliott was a big fan of Arthur Brown's vocals which certainly is obvious at times. While listening to this I thought of bands like Captain Beefheart, GENTLE GIANT and Frank Zappa. Besides the usual instruments we get mellotron on four tracks along with violin and vibes. It's so cool that Lol Coxhill guests here playing some disturbing sax(haha). This is an original, one of a kind listening experience, I'll say that. It took many spins to absorb and appreciate what was going on here but it was well worth the time.

"Death May Be Your Santa Claus" has a drum/ organ intro as these bizarre vocals that are quite wild come in. I'm thinking Krautrock for some reason. Love when the mellotron and those Arthur Brown-like vocals take over as these two themes will be contrasted throughout. "Hangin' On An Eyelid" might be my favourite track. This is brighter at first with vibes, bass and drums standing out then it picks up and the vocals join in. So good! The mellotron really impresses me here as it comes and goes. Piano and drums standout before 4 minutes as the vibes return as well.

"Lucifer And The Egg" is an uptempo organ driven tune with bass and a steady beat as the vocals come and go. I really like the instrumental section from 2 1/2 minutes to 5 minutes with all that atmosphere as the organ, drums and bass lead as they seem to jam. It turns experimental after 5 minutes, very psychedelic and strange as spoken words join in. Pulsating organ and vocals later on. "Somethin' You Got" really reminds me of GENTLE GIANT both vocally and instrumentally. Another favourite. Some fuzz in this one as well beginning before 2 minutes. Crazy vocals and vocal expressions follow.

There are two bonus tracks and I don't usually comment on bonus material unless I'm impressed but they've put these two tracks in back to back right in the middle of this recording which I haven't seen very often. First is "Dip It Out Of The Bog Fred" which is really out there with nature sounds and a multitude of weird samples that come and go. Adventerous for sure. Dissonant sax late. The other bonus song is "Baby R U Anudder Monster" with those silly Zappa- like vocals. They are replaced though by vocals sounding much like Captain Beefheart. A zany tune in many ways.

"Cyclops" is a fantastic tune and it's my co-favourite along with the second track. This is darker with organ at first before this thick and dark atmosphere invades the soundscape. Organ returns along with marching styled drums. Man it sounds incredible after 2 1/2 minutes, like experimental Krautrock really. Some faint violin before 4 1/2 minutes then the organ proceeds to dominate as the drums shuffle with bass helping out as well. "Sic Transit Gloria Mundi" is a short haunting piece with a variety of sounds coming and going.

"Revelations Ch.16 Vs 9-12" features some cool sounding mellotron flute along with an experimental soundscape. It is quite majestic at times even though the subject matter from these versus is very bleak. "Take To The Skies" is another cool soundscape with an urgent rhythm with plenty of organ. "Death May Be Your Santa Claus(Reprise)" is longer and different sounding from the first track it's named after. Dramatic spoken words with a freaked out soundscape as mellotron also helps out. It kicks in before a minute to an uptempo groove. Mellotron flute later. "Funeral" ends it all and it's really orchestral sounding to start but it settles when the vocals join in. It picks up and it's quite catchy here as those orchestral sounds return.

Well if you want innovative and adventerous look no further than this album. It has to be heard to be believed. Not for the faint of heart. Great album!