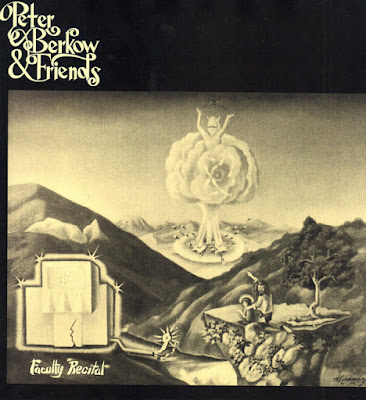 This gorgeous album (released in 1976, recorded earlier) is a concept about the post-nuclear holocaust world and without doubt it's Peter Berkow's masterpiece, an album that I think should stand as one of the best progressive works from the United States in the seventies

Berkow made a few albums in the early seventies.  I will state right off the bat I don't recommend the other ones, which I've heard all.   His singing is something that may be hard to get used to, being in the laryngeally thin Bob Dylan school. He is also one of those artists that recycled his compositions, reworking them from one record to the next. Thus the preceding album "Thesis" has most of the songs from this album and is very similar without being as pulled-together and conceptual.  The last album, perversely called "Bootleg Demo (79)" recycled them yet again in an acoustic format, lacking the fusion that makes this installment exciting.  On the other hand "Live at Cabo's (77)" is a fusion album beginning to end, but not a good one at all in my opinion being too meandering and lacking the brilliant prog moves and pleasant dead-head vibe.

Moving on to the album in question, if you look closely at the back you'll notice the whole thing is divided into three parts.  Side one has two parts, Spiritual Rebate for the Stoned Zen Pimp (which reappears on other albums both before and after), and was composed in transit to California (check what he says about it on the back), and Half-Life (referring to radioactive decomposition of course).  The lyrics for the Stoned Zen Pimp are as idiotic as you'd expect, but very much a part of those times, as I understand them-- not having experienced them  myself.  Side 2 recorded in a different time and place contains mostly vocal acoustic songs though they do revolve around the same theme of nuclear holocaust, sometimes tenuously so though, with occasional reprises of themes from side one.

It's obvious that Peter started as a university student (presumably bio based on his lyrics) but dropped out and managed to make music a full-time career.  I'd be curious to know what happened to him after the seventies, if he burned out as so many others did on too many drugs or if he went on to shine in an academic setting?  Anybody know?

One more thing I can't as usual resist mentioning.  Both paintings are by one Michael Fernandez.  Please -- I beg you -- take the time to look at front and back and admire the surreal (acid-hazed?)  images he came up with for this beautiful album.  Incidentally the preceding album Thesis from 1975 also features a gorgeous cover painting.
Posted by Zen Archer at 11:39:00 PM