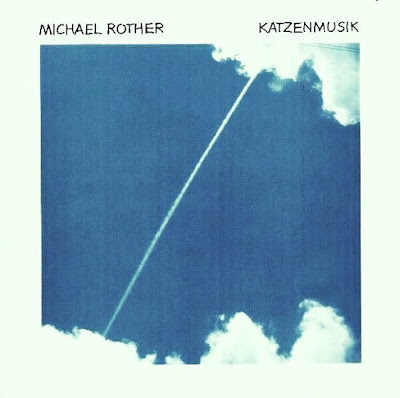 Anyone acquainted with the career of Michael Rother will know what to expect from the former Krautrock trailblazer's third (and best?) solo album: more of the same sunny, uptempo guitar minimalism, with toe-tapping assistance from CAN drummer Jaki Liebezeit and another dynamic production job by the celebrated Conny Plank.
And even if you're not on the Krautrock bandwagon you'll have to admit his credentials are impressive. He was briefly a member of KRAFTWERK, in their early, experimental days (between the first and second "traffic cone" albums)...was one half of the classic Krautrock duo NEU!...teamed up with the legendary electro- pioneers Mobius and Roedelius to form the group HARMONIA...recorded an ambient album in collaboration with ENO...and since 1976 has been a solo artist renowned for his melodic sensitivity and intimate guitar sound.

Rother's third solo effort doesn't stray very far from the template he patented on his first two albums, with lots of blissfully overdubbed guitars arranged in ear-pleasing patterns over a laid-back but unrelenting motorik beat (which a veteran Free Jazz noisemaker like Jaki Liebezeit could play in his sleep). And like some of the best German music it gets a lot of mileage out of precious little material. The first eight tracks here, simply titled "Katzenmusik 1" thru 8", rework the same basic theme in several different variations (including an evocative "backwards" version), separated by short, ambient interludes and one gentle, typically gorgeous ballad.

"KM 9" through 12" (Side Two on my sadly scratched original vinyl) offer more variety, but in the often willfully repetitive soundworld of Krautrock that's a relative term, isn't it? "KM 11" is the highlight here, maybe because Liebezeit's disciplined drumming is a little more adventurous, or perhaps it's the fullness of the studio effects, subtly updating some of the guitarist's early NEU! experiments.

Any of Rother's first three albums would make a good introduction, but this one has by far the best sound (later efforts would actually downplay his distinctive guitar playing in favor of more keyboard-based electronics). I suppose it goes without saying that if you've heard one Michael Rother album you've pretty much heard them all. But on the other hand, if you've heard one, why not hear them all?


Katzenmusik is the third studio album by the German solo artist Michael Rother. It was released in 1979 and includes the single "Katzenmusik 9" b/w "Katzenmusik 2".

The album was recorded between March and July 1979 in Germany at Rother's own studio in Forst and Conny's Studio. Receiving positive reviews the album was released as an LP in 1979 before it was re-released by Polydor in 1982. The album was issued on CD in 1990, and then reisused again in 1993 with bonus tracks and having been remastered. The artwork for the album was designed by Rike with photography by Ann Weitz and Rother himself.

Rother recorded Katzenmusik in conditions that were similar to his debut and second studio album, working again with Neu! and Harmonia producer Conny Plank and augmented with Jaki Liebezeit from Can on drums. Aside from Liebezeit, the entirety of the album was written and performed by Rother utilising guitar and electronic instrumentation.[1] Rother reduced the palette of instrumentation and wrote the album essentially as a suite in two parts.[2] Instead of clearly differentiated tracks the twelve pieces are variations layered around four different five-note melodies that recur either as single string statements triple-track or stark chords supporting them.[2]

The album was the final collaboration between Rother and the producer Conny Plank. Plank had produced with the exception of Harmonia's debut 1974's Musik Von Harmonia, all of Rother's albums including his work with Neu! and Harmonia. Rother worked as his own producer on his subsequent studio albums.

Katzenmusik was first released on Sky Records as an LP in 1979. The album has been re-released several times, again as an LP on Polydor after Rother joined the label in 1982. In 1993, Rother secured the rights to his back catalogue and re-issued all of his solo albums with bonus tracks and remastered sound on his own label, Random Records.[3] In 2000, Rother re-issued all of the albums again in partnership between Random Records and BSC Music.[3] Expanded editions include the 1993-era tracks "Sweet Retro", "Doppelstern" and "Schlangentanz". The album has since been released in the US on Water Records and as a heavyweight 180 gram LP on the 4 Men With Beards imprint.

Katzenmusik marked the third and final collaboration between multi-instrumentalist Michael Rother and producer Conny Planck, as well drummer Jaki Leibezeit, on loan from the group Can. Essentially a suite in two parts, Katzenmusik remains Rother's opus. It's an enchanting, entrancing, swirl of colors and simply pronounced melodies that's at once powerfully majestic and esthetically sublime. Rother's multi-tracked guitars ring from the plaintive to the screaming in the upper registers, layered around four different five-note melodies that recur either as single string statements triple-track or stark chords supporting them. Through it all, in a middling yet even-handed pace, is drummer Jaki Leibezeit, playing his version of the Motorik sound (the one created by Rother and Klaus Dinger in the band Neu! a few years before) in 4/4 time with little to no variation. Rother's re-harmonizing of his original melody throughout the piece in various segments has a mirroring effect over its 37 minutes; it's as if we are taken into the nether-side of his composition and feel its various spaces and textures from all angles. Still, no matter how deeply wound the composition gets, its theme is very simple, and therefore always draws the listener closer to its euphoric chiming and whispering. Rother could very well have titled this album "Blue Sky Music," because despite the appearance of such on the cover, this music seems to be soaring there all on its own. If we just draw near, his glorious language of emotion and tenderness will carry us along too. Katzenmusik cannot be heard too many times. Artists usually get this close only once in a lifetime. Michael Rother has gotten close to this with many of his albums, but this one is singular in its achievement, a perfect melding of taste, dynamics, pace, melodic invention, and emotional and spiritual honesty, all woven into the spirit of rock & roll.