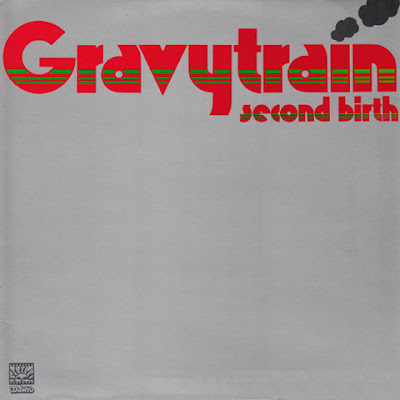 
The misleading title of Gravy Train's third album refers to their migration to a new record label, and the consequent renewal of inspiration. While the band had secured a loyal following, the hope was that their move to Dawn records would lead to the breakthrough which had so far eluded them. Unfortunately, this was not to be the case, and Second birth has gone on to become another albums from the early 70's which collectors search for on vinyl in vain.

The music here is essentially heavy rock with strong prog leanings. The first two tracks Morning coming and Peter have a driving rhythm and powerful organ at their core. Bands such as Uriah Heep and Atomic Rooster come to mind when hearing the vocal harmonies and ambitious arrangements.

The mood takes a sudden and surprising change for September morning news, an acoustic ballad with echoes of US folk rock bands such as The Byrds and Crosby Stills and Nash. On Motorway we move towards the early blues of Jethro Tull, not just through the overt use of flute, but also in terms of the vocal style and instrumental arrangement. The song is an early-ish environmental protest song, which also displays some of band leader Norman Barratt's Christian beliefs.

The longest track on the album Fields and factories continues in a similar theme. At 8½ minutes, the track affords room for some jazz orientated sax by JD Hughes. Strength of a dream takes an unexpected deviation into light acoustic pop, with distorted vocal harmonies and a catchy beat. The song, which was released as a single, has more than a passing resemblance to George Harrison's My sweet lord.

Tolpuddle Episode tells the tale of the martyrs who tried to set up the first trade union and were deported for their troubles. The story is told very literally, with further CSN harmonies on the choruses. The album closes with the seven minute title track, another heavy grinder which weaves it way through a complex arrangement.
Posted by Zen Archer at 12:41:00 AM