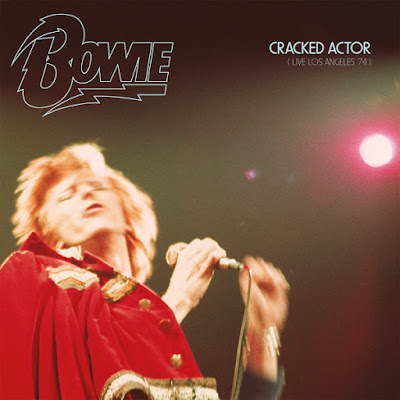 A previously unreleased live recording from Los Angeles on 5th September, 1974. This was a pivotal gig in the transition between the Diamond Dogs tour and the Philly Dogs tour. Produced by David Bowie and mixed by Tony Visconti at Human Studios, NYC in October/November 2016. 3 LP set with etching on sixth side. Recorded live at Los Angeles Amphitheatre, L.A. California, USA 1974-09-05.

A previously unreleased live recording from Los Angeles on 5th September, 1974.
The material on Cracked Actor comes from Bowie’s Los Angeles performance on the so-called “Philly Dogs” leg of his Diamond Dogs tour – the same show that was captured in part in a BBC documentary of the same name – during which he performed material from both that album and the soul-inflected Young Americans, which was released the following year. The performance came just months after the recording of David Live, Bowie’s notoriously spotty first live album, but features a more R&B-oriented band including Luther Vandross on backing vocals, assembled to perform the new Young Americans material. Cracked Actor was mixed by Tony Visconti, Bowie’s longtime producer.
“I had the good fortune to see one of the earlier versions of the Diamond Dogs tour in New York. It was the most ambitious stage design I had ever seen for a Rock show. There was a suspension bridge between two towers. David would disappear and reappear minutes later at the top of the bridge. As he sang Sweet Thing the bridge would descend to the bottom and he stepped off to finish the song on the stage.
He also sang Space Oddity into a telephone whilst suspended over the audience, sitting in a chair attached to the arm of a cherry picker. These mechanical props often malfunctioned making a night to remember. The choreography was created by Toni Basil, another first, for the interactive dancing between David, Warren Peace and Gui Andrisano. By the time the tour reached Los Angeles the personnel had changed and the band was smaller.
Michael Kamen left the tour and Mike Garson played all the keyboard parts. Carlos Alomar and Luther Vandross were added as well as an American based rhythm section. By then the band was well greased and the show went off like clockwork. David was a lot looser, he seemed to be ecstatic that night; so apparent with some very adventurous, almost acrobatic, interpretations of his older songs and his quirky banter with the audience.
The set changed a bit from earlier shows although most songs were a combination of Diamond Dogs and older classics. Now very pleased with the Young Americans album we had recorded during a tour break he introduced some new songs without saying the name of the new album. They were It’s Gonna Be Me (very well received) and a frantic paced finale of John I’m Only Dancing (Again). Before the long instrumental outro had finished David was already being driven away in his limo. A solemn voice announced to the audience clamouring for an encore, “Mr Bowie has left the building.”
Revisiting this era in the post-Blackstar period had me a little choked up. David used to sit just behind me when we were working on that album and now I was mixing his incredible vocal performances from 1974. I couldn’t help turn to where he once sat and ask, “Well, what do you think of that mix?”.” — Tony Visconti – April 2017
Posted by Zen Archer at 5:17:00 PM