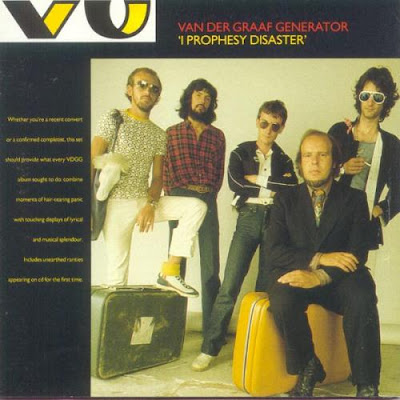 
A Van der Graaf Generator compilation is never a bad thing as the band had so much to offer and choose from to fill up an album. I sat down with this compilation simply to hear all these tracks compiled in a different way than the album releases and to re-familiarise myself with some of the lesser known tracks. The first thing one notices is the almost maddening patience the band has as it introduces each of the tracks. But there are always moments of brilliance with each track as the pace ranges from slow to breakneck, and the time signatures change throughout, not only with the instruments but with Hammill's incredible vocal delivery. It is pleasant to listen to these cuts taken from the classic albums such as the choices from the debut 'Afterwards,' and 'Necromancer' that demonstrate the innovation in the early years.
'Refugees' is a treasure from "The Least We Can Do Is Wave To Each Other", though I definitely prefer the brilliant 'Darkness (11/11). 'The Boat of Millions of Years' was a rarity until its release as a bonus track on the remaster of the aforementioned album.

We move then to some tracks from the masterpiece "Pawn Hearts", including genius composition 'Lemmings (including Cog)'. Here, it is easy to see why this band are musical pioneers and boundary pushing visionaries. The track begins innocently enough, "I stood alone upon the highest cliff-top, looked down around and all I could see were those that I would dearly love to share with crashing on quite blindly to the sea." David Jackson's saxophone soon turns it up a notch and we are treated with the maelstrom of sound and verbal music psychosis that is quintessential VDGG. 'W' follows that is a track that never made it to the album but it is nice to hear it here.

"Godbluff" is well presented by the dark, brooding menace of 'Arrow'. Hammill's vocals are more tortured and raspy on this track and are a surprising contrast to the smoothness on the other tracks. The track begins with a percussion and saxophone improvisation that reminds one of the early King Crimson years. The track relies highly on saxophone and Hammond but the understatement of the bass is admirable and knits it all together perfectly.

'La Rossa' is one of the gems from "Still Life", a wonderful composition with an antithesis of intense atmospheres and entrancing beauty; Hammill absolutely blasting out with an emotive delivery. Jackson is a revelation on sax and the organ grinds powerfully throughout, along the drums and bass motifs. This track is truly a wonderful foray into the dark netherworld of VDGG. Ear splitting vocals and ambient keyboards are the order of the day and Hammill is a master of the insightful existential lyric. This is him at his existential best as he indulges in caterwauling along genuinely off kilter melodic jazz dissonance.

'Ship of Fools' was an unreleased single but now represents the bonus track from the remastered "The Quiet Zone/ The Pleasure Dome" with raucous servings of heavy guitar, and intense vocals full of angst and rage. It is perhaps the heaviest that the band gets, and shows a new direction that the band took during this era of 1977.

'Medley (Parts of "A Plague of Lighthouse Keepers" and "The Sleepwalkers")' is the 13:32 treasure from the live "Vital". I always loved this version from the live performance and at least this compilation does include some of the ingenious "Pawn Hearts" epic. It is not as good as the epic of course but still nice to revel in. The way it segues into "Godbluff"'s 'The Sleepwalkers' is a stroke of genius and again it is great to hear those quirky melodies again. It begins softly and then launches into the maelstrom of sound and verbal music psychosis that is VDGG. The Hammond and sax take us deeper into the abyss and VDGG really let loose with wild staccato riffs and a monstrous finale where everything just explodes into a paroxysm of uncontrolled mayhem. It's a killer track and moves from romanticism with piano elegy only to explode into a doom-laden soundwave with wild saxophones screaming over unfriendly sounds such as Dickie's keyboards and Guy Evan's off-kilter percussion. Potter's bass is booming on this live album and is one of the real drawcards to hearing the whole concert. 'A Plague of Lighthouse Keepers' was the first track I had heard from this amazing band that tells the story of an eyewitness who sees the unspeakable as he feels his body fading in a storm while voyaging on a doomed ship; It reminds one of Coleridge's Rime of the Ancient Mariner. 'The Sleepwalkers' is zombies rising from their sleep to wreak terror upon the unwary; both work together as a grande guignol visceral excursion into the macabre.

Overall, this is a terrific compilation but is missing some of the indispensable VDGG tracks. I like the way it features unreleased tracks at the time and still retains some of the masterful tracks that made this band such wonderful progressive legends. There is nothing new to offer those who own the VDGG remastered CDs but still is better than the average VDGG compilations as it features all of the years to the present date of release; from debut to "Vital".
Posted by Zen Archer at 8:43:00 PM