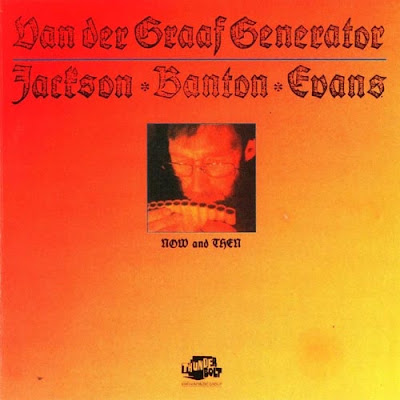 
Most of the tracks on this album were recorded around 1984, after VDGG had split. With Hammill perusing a solo career, the other three band members (Guy Evans, Hugh Banton, and David Jackson) recorded a number of tracks together. It is doubtful whether these were ever seriously intended for commercial releases, and even more doubtful that they were intended to bear the name Van Der Graaf Generator. Inevitably though, they found their way into the bootleg market as "Gentlemen prefer blues" and bearing the VDGG name. They have since gone on to acquire quasi-official status in terms of release, although there is no indication that the band have ever sanction them.

Two of the tracks, "The liquidator" and "Tarzan" are from an entirely different period in the band's history, both featuring the classic line up including Hammill (who writes both tracks). These songs date from 1973/4, between the "Pawn Hearts" and "Godbluff" albums. These tracks are taken from the "Time vaults" compilation.

Those seeking the lost treasures of Van Der Graaf Generator would be well advised to tread carefully when it comes to the 6 Jackson, Banton, Evans tracks. I am not saying there is anything wrong with them, but they bear little resemblance to anything VDGG have ever done. All the tracks are instrumentals, Hammill's defining vocals are absent altogether. The tracks are much more accessible than is customary for VDGG's work, with simple rhythms and themes; they are effectively soft smooth jazz outings.

At times, we move into pure, traditional jazz, such as on "Gentlemen prefer blues" which is simply a sax improvisation by David Jackson. The jazz is put aside temporarily for the experimental "The main slide", a piece devoid of musical structure or form. Bizarrely, this gives way to a reggae influenced synth backed interlude called "Tropic of conversation". As pleasant pop/reggae/jazz ditties go, this one is actually quite enjoyable. While "The epilogue" fits in well with the other tracks, it actually dates from a previous incarnation without Hammill from 1977. Jackson and Evans are absent from this track, which features Eric Cairns and Ian Gomm instead.

Of the two tracks which include Hammill, and are thus by the full VDGG line up "The liquidator" is one of the most upbeat and enthusiastically performed songs ever recorded by the band, with Hammill positively bouncing along to his vocals. "Tarzan" is a short funky instrumental more in keeping with the rest of the material here.

In all, one for the VDGG collector really. The music is reasonably enjoyable, but it is somewhat different to the style usually associated with Van Der Graaf Generator.
Posted by Zen Archer at 7:12:00 PM