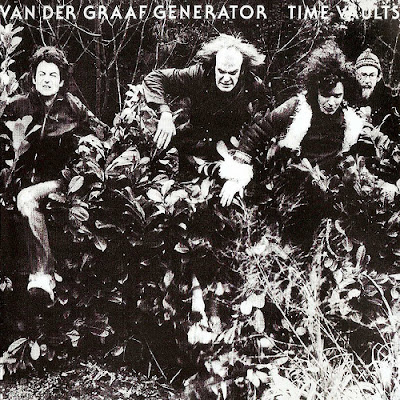 Releases information
First officially released on musicassette only by Sofa Sound in 1982, later on LP by Demi Monde (DM 003) and on CD by Thunderbolt (CDTB 106).


"Time vaults" is not an official VDGG releases, and indeed it was never intended that the music it contains be released at all. While some tracks, such as "The liquidator" are pretty much completed, others are clearly works in progress. The tracks here are all Peter Hammill compositions recorded during the band's sabbatical between "Pawn hearts" and "Godbluff". The tracks originally found their way onto the bootleg market, but have since been (perhaps reluctantly) legitimised.

During the period covered by these tracks from 1972 to 1975 VDGG did not officially exist. Hammill was pursuing a solo career, with other members of the classic line up helping out along the way while also working on their own material.

The opening track "(The) liquidator" is the best of the bunch here. Opening with some delightful echoed piano, Hammill offers a fine vocal performance on a rousing, rocking number. The song sits alongside the band's most accessible material, a sort of "Theme one" with vocals.

Unfortunately that's about I really. Much of what remains is made up of studio jams, rehearsals and demos. As the quality of the sound dips, so does the quality of the music. To be fair to Hammill and the rest of the band, the experimentation which can be heard here was just that, this is not a final product by any means. Some of the tracks (such as "Coil night" and "Tarzan") remain in instrumental form, presumably intended as backing tracks for as yet unwritten lyrics and vocal melodies.

The title track is the most bizarre, the piece drifting in and out of "Rudolph reindeer" and a plethora of other themes. "Faint and forsaken" sounds like a loose attempt to recreate "Theme one", but without the benefit of a memorable melody. It sounds great with all those thumping keyboards, but a tune would have been nice.

In short, one for the VDGG fan who has to have everything by them. That said, worth acquiring just to hear "Liquidator".
Posted by Zen Archer at 7:00:00 PM