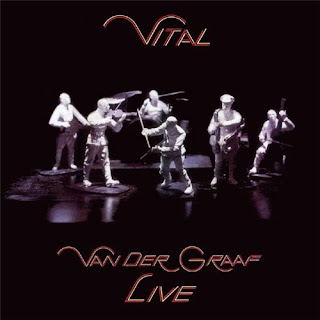 
Perhaps this sits much better in a punk-rock collection, even though this is no simple punk rock, either.
One of the things I always loved about Vital is it's raw playing and the best (and probably only) prog/punk hybrid ever. What a show!

I don't know how does the original pressing compares with the 2005 Remaster (the one I have), but the sound of the latter is crystal clear enough to hear every nuance but not enough to miss the edge, which is damn nice item in my book. Here you get to hear PH's flagerised guitar and sweetly obnoxious voice, Potter's amazing fuzz bass (something I think he, alongside Hugh Hopper, is a king of), Guy's jazzy drumming, Smith's lovely violins, Dickie's compressed cello and electric synthesizer and synthesized electric piano, and even Jackson's bleeded unrecorded saxes, a real joy to hear. Not quite, because Vital is an as uncomfortable listening experience as it gets, where the listener is constantly challenged and reminded to pay attention, the mark of an essential live record and the why this one is so high in my list, maybe even more than Live At Leeds.

What I like the most about it is the inclusion of the then-unreleased stuff like the paranoid "Ship Of Fools" or the angry medley of "Urban/Killer/Urban", and Charles Dickie's homemade synthesizer (the same from The Future Now) adding atmosphere such as the sequences on "Door" or the processed noise at the end of "A Plague Of Sleepwalkers", which may look like little but makes a whole lot of difference.

The album opens with some uncertain applause just before Hammill plays some notes to test the air and then proceeds with the riff from "Ship Of Fools", a ferocious rocker with a nice violin/guitar/cello bridge; "Still Life" contains some of the best fuzz bass I've ever heard, doubling the guitar, and somehow I don't feel disappointed about this rework; "Last Frame"'s intro is a teaser for the forthcoming brutality, another piece of Hammill's constant question of identity; this version of "Mirror Images" is much superior than the one from pH7, it opens with some violin-dominated gloomy intro before it becomes a bittersweet ballad of sorts; "A Plague Of Sleepwalkers" is a medley, of course, but just as the reworking of "Still Life", there's enough elements to make it special such as the extended intro and moving ending; "Pioneers Over C" is the only song I think could have been trimmed or made differently, but just because the sax wasn't recorded to make the solo audible enough; "Sci-Finance" in this form is a monster, contrary to the dreaded version from In A Foreign Town; "Door" is odd and Peter himself admits it, but that doesn't mean it isn't good; "Urban/Killer/Urban" begins with a jam and ends in a similar way, the stuff within is just as good as all the rest; and "Nadir's Big Chance" closes Vital with an angular, slightly sloppy version.

I understand this isn't prog as such and prog fans may not be interested in this sort of stuff, but prog or not, this is excellent enough as a live record to ignored.
Posted by Zen Archer at 5:41:00 PM