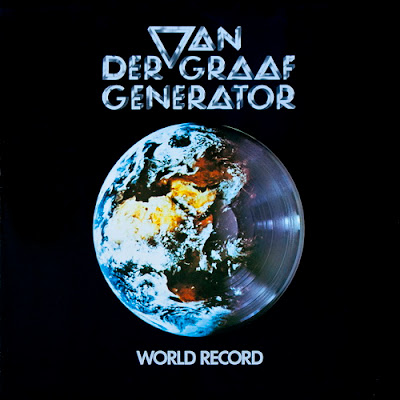 The mood of this record is dark and melancholy. Every single song reminds me of November (the birth month of Peter Hammill), though incomprehensible it was recorded in the month of May (my birth month). The dominating mood is farewell here. The forthcoming third split of Van der Graaf Generator and the forthcoming separation of Peter from his longtime girl-friend already show up on the horizon.

The remastering of the record is most pleasing, though in some savage passages Peter's roaring voice couldn't be made as clear as the instruments out of technical reasons.

The most interesting two songs are "When She Comes", which I see as a kind of follow-up to "La Rossa" in Peter's personal love affair, and the over 20 minutes long "Meurglys III, The Songwriter's Guild", a perfect fusion between Rock, Blues and Jazz. Peter excels on electric lead guitar here. (Funny, but "Meurglys III" always reminded me of "I want you / She's so heavy" by The Beatles.)

The year 1976 was incredible creative for Peter Hammill. He wrote the songs for "World Record", each one of high quality. In the same year he wrote and produced his stunning solo album "Over".

Both have the same topics: split, leave-taking and wrench. In some of the songs of "World Record" Peter Hammill tries to generalize these themes into reflections of typical human behaviour, above all in "Masks" and in "A Place to Survive". Peter explained that from time to time he wrote songs that suited the band. These couldn't be about his own traumata in a too personal way.

The two bonus tracks bring "When She Comes" and "Masks" again - this time from the BBC Peel sessions. Deripped from even the small overdubs of the official production these tracks show the wonderful structures of the music of Van der Graaf Generator.

After two quickly succeeding masterpieces, VdGG went back in the studio, but this time, they would actually deny the "Never two without three" saying and head for the "Two out of three ain't bad". While still a worthy Graaf album, World Record (with a stunning artwork again on a single sleeve) is clearly a step away from the right direction.

Clearly (and quite unfortunately), it appears that Graaf's inventivity and inspiration had come to the end, and the quartet will once again go their separate ways after this album. The first side of the vinyl is filled with rather short tracks, none of which would've made the cut on the previous albums, but in no way are they fillers, I insist! Just tracks that fail to have as good ideas as before, like if all of them ideas had been used on the previous two albums.

However, on the second side of the vinyl, there stands a monster track Meurglys III (Hammill's guitar spirit) with an incredible descending crescendo, and clearly the highlight of the album. However, the track does overstay its welcome a bit too much as the reggae jam is simply a bit too long and highlights Hammill's (relative) weakness as an electric guitar player, but overall, if this track had been shorter by five minutes, it might have a been Graaf's crowning achievement (with Lighthouse). Please note Italian group Germinale will record an astounding cover, but more succinct) on their second album.

Still a typical VdGG album, just not as strong as the previous five albums, every with will still find this album a must-have. Unfortunately, the group will implode (due mostly to exhaustion), leaving Hammill to suppress the Generator part of their name and find old mate, Potter, keeping Evans and and enlisting Smith on violin, for a drastically different sound. But this is another story
Posted by Zen Archer at 4:59:00 PM