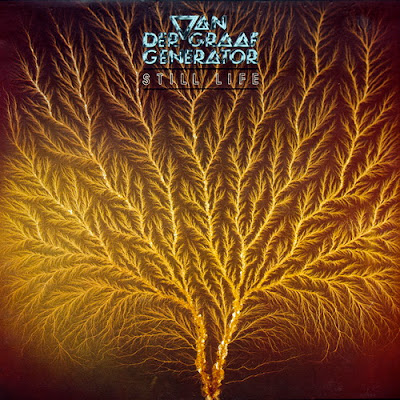 
As there were remaining tracks from the previous writing/recording sessions, Still Life arrived fairly quickly on the market, and what a splendid album it was! Godbluff's twin album is actually superior (and ultimately more rewarding) to it and it shows with the stunning artwork sleeve.
Opening Pilgrims (and its slowly solemn descending crescendo) is a sure winning salvo only topped by the lengthy La Rossa (their Italian affinities showing), while the very personal My Room (Hugh Banton on bass and Jackson's superb ambient sax, with Evans' restrained drumming) is a real contender for the best Graaf track >> not far from House With No Door. The title track is another spine-chiller, with Hammill's doomy and desperate vocals crying out in the middle of the night, before the quartet is picking up momentum and Hammill's mood changing to anger. Then comes the lengthy and awesome Childlike Faith In Childhood's End (inspiration taken from a book that was particularly well appreciated from all band members) closing off the album in a grandiose way.

While two of the five songs were written (and recorded) during the Godbluff sessions, the remaining three tracks are certainly of the same calibre if not even better, but certainly the proof that Graaf still had major things to say in the realm of prog rock. As I said before, I prefer Still Life to Godbluff for it has no weak track, but sincerely, choosing between there two is something I would rather not do.
Posted by Zen Archer at 4:39:00 PM