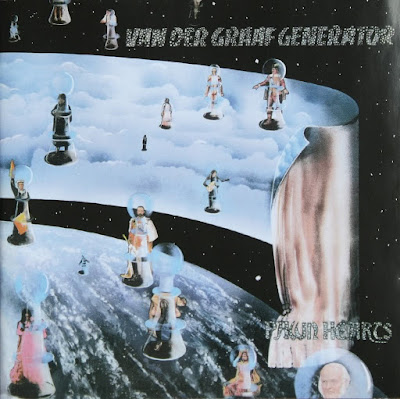 # A different mix from the version on the U.S. and Canadian LPs or the UK single
$ The February 1972 single used the second version
* Originally intended to be part of the abbandoned double disc initial project


With the astounding Pawn Heart, VDGG has reached its peak artistically, although financially they were broke. Only three tracks made up this fourth album of theirs, but awesome, each and every one of them, they were. Again a Paul Whitehead-designed artwork, with a very controversial inner gatefold. With this album, they reach to the comparison of Thick As A Brick, Selling England, Angel's Egg, Lark's Tongue (or Lizard), Grey and Pink, Dark Side or Close To The Edge. A real reference! This is the album where Peter Hammill reaches maturity mixing meaningful lyrics with superb melodies for his astounding vocal range and his weird voice. I must say that once again the remastering job did miracles but on this album, Hammill's vocals seem to have profited most from the job.
Lemmings is one of my fave VDGG track and with its 11 min+, it has every chance to please any proghead not allergic to that peculiar voice. Man-Erg is another superb classic and reaches a maximum in conciseness also making reference to the two previous albums by evoking Killers and Refugees. A real tour de force, but was those evocations of previous tracks not prophetic? A bit like Fripp closing off a Crimson chapter by bringing back previous members for the grande finale of Starless on Red.

From the first notes of piano of the last track of the vinyl and the first goose bumps after hearing Jackson evoking the fog horn of the lighthouse with his sax ( again evoking another earlier song? Darkness, in this case), a real fan can only be awed at the grandiose voyage that lay ahead for us ? for the Hero of the story, however no trip, voyage or even promenade except on the top ledge of his building. I always shiver in delight at the beginning of the haunting melody of the second verse of Eyewitness: "I prophecy disaster, then I count the cost ?. I shine but shining, dying, I know that I am lost." - What perfection. Many more motions lay ahead , notably Banton and Jackson's impressive rendition of what a lighthouse keeper can feel among which solitude and boredom must the cake. Only Klaatu will make an even more eerie Lighthouse Keeper theme in their second album: Hope

In case someone has problem getting into this great track, I can only suggest them to find the Belgian TV special where they do this track almost un-rehearsed (they had not expected that request), with Hammill having to find a lyrics sheet from the album to remind himself of the words/ it is right there on his piano. Grandiose!!!!

The first bonus track is a rather quirky BBC theme and dos stick out of the album, but not like a sore thumb. Then comes W, much more in tune with the dark forebodings of the other tracks, but still not bringing that much added value to the album. The last three bonus tracks are little more than bits and pieces, jams and improvs from baton Evans and Jackson: not really in line with the album, either.

Then will come some three years before VDGG will be re-formed, but all Generator unconditional fans can turn towards the fabulous trilogy of Hammill solo albums: Chameleon, Silent Corner and In Camera. Do make the financial effort for the mini-Lp sleeve, it is worth it, but don't get rid of that first generation CD, because the remastering's EQ'ing will not be to everyone's tastes, namely in audiophile quarters.
Posted by Zen Archer at 11:01:00 PM