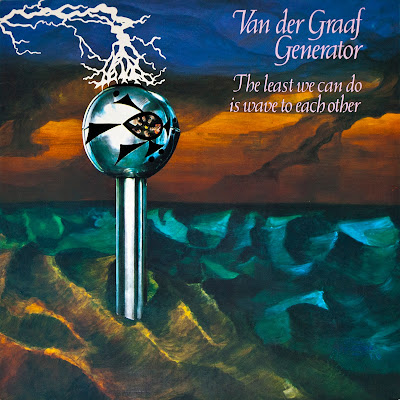 
With this album, we plunge into the fantastic world of VDGG without any hope or resurfacing or even finding an exit. If you got this far and had the urge to investigate this band, why would look for an escape, anyway? So with the first album of the classic era, VdGG with its almost definitive line-up (only bassist Nick Potter will make an early exit) strikes for gold with this album. I will review the remastered album as the difference is enormous compared with the first generation Cd (not necessarily all that positive, because the remasters are horribly EQ'ed), which I never owned as I had friends lending them to me, until recently as I bought the Mini Lp sleeves, which comes very close to capturing the excitement of the big vinyl covers, this being valid for the next two albums also.
Right from the first seconds, can we tell the difference with the wind noises of the opening track Darkness (written on a Nov 11, hence the second part of the title), do we hear Jackson's first growls on his sax sounding like a mist/fog horn (much the same way he will do in the Plague Of The Lighthouse Keeper), something I had simply never heard before even after some fifteen years of listening to the album. Darkness is gaining tremendously from the remixing and is even more awesome (and awe-striking). Refugee is also profiting from the remastering job as the cello is clearly better heard as well as the bass guitar. The album version is more easily recognizable than the single version available as the second bonus track. White Hammer is still the monster track it ever was but the remastering job was not as good as I was expecting it to be: The enormous effect-laden sax-induced screams supposed to represent the torture of the Spanish Inquisition is still atrocious (which it is supposed to be since it is torture) but till way too loud and really ruins the enjoyment of the track. Oh well! "Un coup dans l' eau ».

Side 2 ( I will always have problem not thinking of the VDGG vinyls) then starts with the average Whatever Robert (Fripp?) Would Have Said has some rare electric guitar from Potter and the no-less average Out Of My Book however flute-laden it is. Both tracks gaining little interest IMHO from the remastering job done on the album. Clearly the pinnacle of the album is the 11 min+ After The Flood. The sinister atmospheres and strong dramatics are clearly an acquired taste as is also the effect-laden Hammill screams still way too loud and unsettling, also maybe an odd choice in the remastering choices operated. Nevertheless the whole track is blood-curdling, not just that awkward scream. "Uncanny Masterpiece" would've said Roger Townstart, had someone not stolen his line a year before. The real gift of this releases is the superb B-side of the Refugee single Boat Of A Million Years , which blends really well with the rest of the album tracks. Actually since his track was not accessible to me for decades, it gets always a second and third spin.

The real interest is there to acquire those remastered Cds with worthy bonus tracks, especially if you make the fully justified financial effort for the mini-Lp sleeve. But you may not want to get rid of that first generation CD, because the remastering's EQ'ing will not be to everyone's tastes, namely in audiophile quarters.
Posted by Zen Archer at 10:53:00 PM