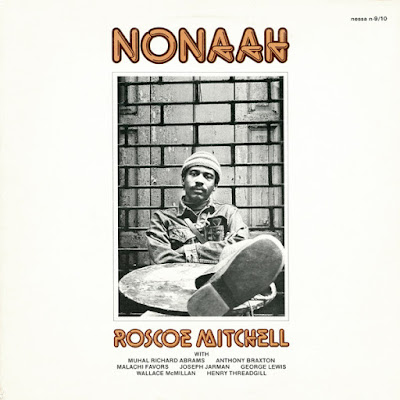 
One of the significant things that set AACM music apart from its brethren in New York in the 1960s and early 1970s was its use of space, of opening up the music so that things could occur within broad, environmental relationships. That sense of space was very important. In an entirely different take on "energy" music, the challenge of discerning what could be perceived as multiple, self-contained orbits was uniquely gratifying. To listeners weaned on the intervallic leaps of reed player Eric Dolphy and the ringing "wrong" notes of pianist Thelonious Monk, and the areas of quietude and vastness made perfect sense in the early music of reed players Roscoe Mitchell and Anthony Braxton.

On first hearing, Mitchell's Nonaah turns the perceived spaciousness of AACM-music on its end. Gone are the silences punctuated by little instruments or brief, anguished saxophone squalls that seemed to recoil as quickly as they appeared. Nonaah was something else entirely, an exorcism of the alto saxophone as much as putting the instrument through its paces. Released in 1977 on Nessa Records as part of a continual and tireless documentation of the music of the AACM, starting with Lester Bowie's Numbers 1 & 2 (Nessa, 1967), Nonaah consisted of a double vinyl set including solo alto saxophone, a saxophone quartet, duos with saxophonist Anthony Braxton and bassist Malachi Favors, and a trio with pianist Muhal Richard Abrams and trombonist George Lewis. Now on CD for the first time, this set adds five additional alto solos.

"Nonaah" itself is represented in both solo and quartet versions. The solo, which opens disc one, comes from a 1976 Wilisau concert, and lasts just over a half hour (including eight minutes of the Joseph Jarman composition "Ericka"). The title piece was previously referenced on the Art Ensemble of Chicago's Bap-tizum (Atlantic, 1972) and Mitchell's Solo Saxophone Concerts (Sackville, 1973), but this is its fullest explication. The piece begins with a jagged eight-note phrase, with its last note being held in gradually longer intervals. Each attack of the phrase itself becomes more distorted, each repetition goading the audience into a mixture of cheers and guffaws at some of the most naked saxophone playing they'd probably ever heard. At about five minutes in, the held tone becomes smeared, bent, and torqued; Mitchell begins rushing the phrase and the key becomes ambiguous. It is a furious troweling of hard ground—of forcing a very contained phrase into malleability and to either give up its fruits or die trying.

At nine minutes, Mitchell has exhausted this phrase, torqued it into recognizable but worked-over fragments. Here he moves on to the form of a plaintive ballad, running his keyed, reeded fingers over a delicate line, an insect with feelers for sound. Seemingly trepid, the intervals he's working with are incredibly vast, from low, velvety purrs to high-pitched, rounded pops. The next movement is faster, harsher and high-volume, buzzing and metallic. It seems to cull its language from both the original theme and the ballad portion, and is resoundingly physical—one can feel Mitchell's body contorting along with the phrases he's building up and tearing apart. One wants to say this is staunchly avant-garde music, and it is, but it's not without the trilled leaps of saxophonists Charlie Parker and Lester Young, the smoky, crushed fabric of a swing player, or the searing honk of R&B.

Jarman's staple "Ericka" is a ballad of extraordinary depth and beauty; Mitchell approaches it with warmth, stateliness and whimsy. His solo is full of curlicues, lines rushing down the staircase, and blurs in which notes pop out like flickers of light. By the end of the piece, Mitchell has found his way to clenched air and popping veins, energy being bottled and trying to escape both at once.

In January of 1977, Mitchell brought saxophonists Jarman, Wallace McMillan and Henry Threadgill together for a seventeen-minute saxophone quartet recording of the title piece. As the final work on the original double album, it marked an expanded exploration of the materials on side one. Operating at what appear to be slightly different intervals, the first movement is rendered like a rickety string quartet, clearly intertwined but operating with a logic that's distressingly internal. There's a bounce to it akin to a Steve Lacy piece gone horribly awry or a player piano stuck on repeat. The second section sounds lush, reminscent of Duke Ellington in its colorful expanse and woody timbres (you could almost swear there are a cello and violin present). Delicate measures and caressed intervals become brilliant orchestral floes, hints of saxophonist Johnny Hodges bringing the section to a unison close. To hear the contrasts between pointillist, scrabbling jounce and tone poem is something more pronounced in the quartet, proof (as if one needs it) of an excavating process leading to a compositional plenum.

Nonaah is extraordinarily confrontational music—it presents instrument, composer and materials in a profoundly naked light. Perhaps more important than opening up one's preconceptions about the saxophone, it also complicates the AACM aesthetic and vision. Rather than providing space, this is incredibly dense music, bristling with tension that is not overcome by ecstatic release. Nonaah is about as direct as one can get and, lest one forget, the music of Mitchell, Abrams, Jarman, Braxton and their cohorts is rebellious to this day.