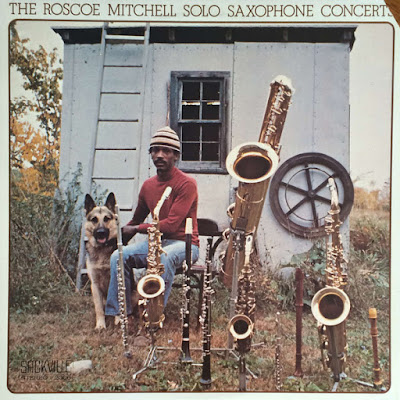 Roscoe Mitchell is a founding member of The Art Ensemble of Chicago and has only had occasional dates as a leader through the years. This is one of his most rewarding although listeners accustomed to full rhythm sections and conventional swinging might find this one hard to get into. Mitchell proves to be a brilliant architect of sound, frequently building up a simple idea to unimagined heights of complexity. Performing on soprano, alto, tenor and bass saxophones at the three festivals at which this music is taken from, Roscoe Mitchell demonstrates why he is considered one of the masters of avant-garde jazz. This solo set is only topped by his 1976-77 Nessa recording Nonaah.

Roscoe Mitchell's CD The Solo Concert is actually culled from several different performances in the mid-'70s, done in Kalamazoo, MI, Montreal, Quebec, Canada, and Pori, Finland. Though the famous front cover photo taken by Coda Magazine's Bill Smith depicts Mitchell with his arsenal of woodwinds including flute and clarinets, he only plays alto, soprano, tenor, and bass saxophones. The variety of sounds he is able to extract from his horns has always been remarkable, but there's a refined restraint and held-in dynamics heard on many of these spontaneous compositions and thematic improvisations. Playing solo was new for Mitchell at this time, and he's resplendent on his legendary, spiky, tongued, minute-plus improvisation on his favored alto sax for "Nonaah," which bookends the program from Montreal and Pori respectively. "Ttum," from the Montreal performance, really emphasizes why the alto is the one that reflects his personal voice, in a patient dialect that is continually surprising, overblown one moment or sweet the next. Also on alto, "Enlorfe" is a tribute to John Coltrane on the horn he started out with professionally (see Dizzy Gillespie's "Dee Gee Days,") using tiny, slightly strained notes. The imposing, deep, and mid-range bass saxophone is utilized on the modal, extrapolated blues (sic) "Tutankamen," the Malachi Favors composition adopted by Mitchell and the Art Ensemble of Chicago. A two-part piece, "Eeltwo," done in Kalamazoo, has a resonant tenor saxophone singing in a tone reminiscent of vocalist Billy Eckstine, using the upper register as garnish, employing a lilting refrain, or running scales effortlessly. The soprano sax comes out during "Jibbana" in varying dynamics, blurts, and whispers, while "Oobina" has Mitchell switching back and forth from bass to soprano, exploring all timbres and volume levels. This is a reissue of an original recording from the Sackville company which preceded the Nessa label magnum opus Nonaah by two years, but that album also included duets. So this is the first, greatest, and premier solo recording by Roscoe Mitchell that has to go down as one of his all-time best, and a prime example of how to stand alone, unafraid of any preconceived notions in how modern jazz should sound or be performed.
Posted by Zen Archer at 4:11:00 PM