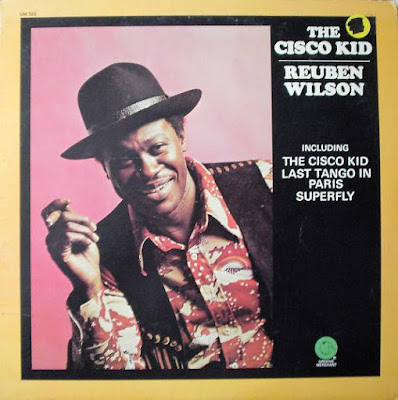 Reuben Wilson's second Groove Merchant session, The Cisco Kid, pairs the organist with a murderer's-row support unit including guitarist Melvin Sparks, trombonist Garnett Brown, bassist Bob Cranshaw, drummer Mickey Roker, and percussionist Ray Armando. Given the talent involved, it's regrettable that the album adheres to such a pedestrian formula, reimagining the same pop and soul covers as virtually every other jazz-funk session issued at the time. Besides the title cut, a reworking of War's Latin soul monster, the material includes readings of "Superfly," "The Look of Love," and "We've Only Just Begun" -- the energy and intensity nevertheless ratchet up several notches for the Wilson originals "Snaps" and "Groove Grease," elevating the entire endeavor in the process.
Posted by Zen Archer at 11:48:00 PM