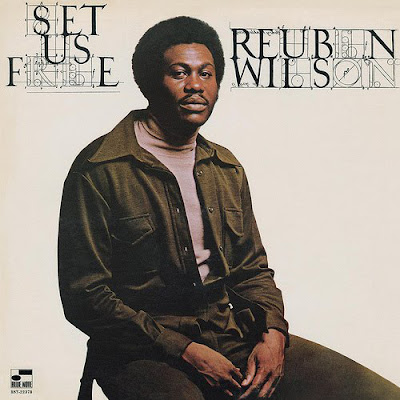 Set Us Free, Reuben Wilson's final album for Blue Note, was issued in 1971. Since that time it has become an immortal and much sought classic by beatheads for a single track: "We're in Love." DJ Premier sampled it liberally -- for its Hammond B-3 vamps, backing vocals, and decorative percussion -- for use on rapper Nas' smash "Memory Lane." Hip-hop fans suddenly had to hear more, and as a result not only is Wilson active again on the circuit, but there has also been terrific interest in his catalog. Not only did Blue Note's Michael Cuscuna reissue this all but forgotten nugget for the label's killer Rare Groove series (before August 2008 it had never been available on CD in America), but Chicago's Dusty Groove re-released 1975's funky Cadet burner Got to Get Your Own during the same month. Set Us Free stands almost completely outside the space inhabited by the rest of Wilson's Blue Note titles. Produced by the late George Butler, it's a wildly textured and seamless aural meld of gritty B-3 jams, smooth yet psychedelic soul, rock, pop, and funk. Wilson and Butler employed a killer band for this date that included reedman Jerome Richardson, bassist Richard Davis, guitarist David Spinozza (who also plays some electric sitar on the date), drummer Jimmy Johnson, conguero Ray Armando, percussionist Specs Powell, and Gene Bianco on harp; the entire proceeding was arranged by the great Wade Marcus.
Vocal arranger Jimmy Briggs was brought in to write charts for a female backing chorus on a funky Latinized blues version of "Mr. Big Stuff," the lush psych-soul babymaker "We're in Love," and Marvin Gaye's "Mercy, Mercy, Mercy (The Ecology)." This isn't to say that there aren't slamming organ jams on the set; Marcus' "Right on with This Mess" makes that abundantly clear. That said, even on these back-to-basics numbers, Wilson's B-3 may be up front and slamming, but Richardson's sweet soprano saxophone (which, to be fair, wails in its solo), the warm guitar lines, and the congas add depth and dimension -- even while Johnson's drums are breaking all over the place. The title track, written by Eddie Harris, is smooth instrumental soul at its best -- Richardson's soprano and the hand drums are up front with Davis' slowly rolling bassline and the hand drums. But it cuts loose in places, with Wilson adding textural flourishes in his solo rather than soaring above the mix. The closest thing to the hard bopping blues Wilson's other recording showcased are sections of the closer, "Tom's Thumb," but even here, with its harp adornment, augmented major sevenths by Spinozza, and the shuffling one-two one-two of Johnson, this comes off as exotic -- especially with the wonderful percussion section laying in the cut as he breaks often and true. Wilson is the only one letting it rip. Yet somehow, this ambitious, lushly orchestrated album not only sounds current, but still ahead of its time. Highly recommended.
Posted by Zen Archer at 10:52:00 PM