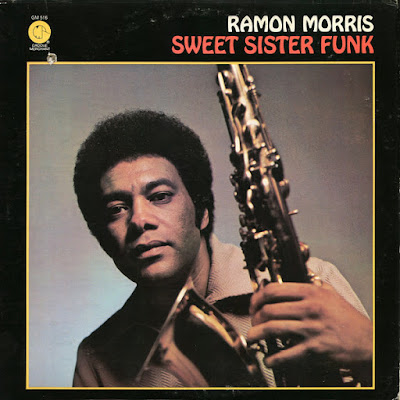 
Who was (or is) Ramon Morris? His saxophone playing on 'Sweet Sister Funk' (1973, originally on Groove Merchant) - apparently the only record he ever made as a leader - is so mature, bold and powerful that one is almost tempted to think that a saxophone giant with contractual ties to another label temporarily assumed the identity of one Ramon Morris and proceeded to record one of the grooviest jazz records of the early Seventies. It is such a pity that Ramon Morris apparently never got the chance to make another record as a leader. You can hear him again on Reuben Wilson's 'The Sweet Life' (also on Groove Merchant), which contains a funky version of "Inner City Blues" sampled by A Tribe Called Quest.

Every song on this album is great. Indeed, few jazz records of the early seventies are groovier than 'Sweet Sister Funk'. I would give this record a six-star rating if I could, yet I only rate it 4 stars because of the sloppy reissue. The cd I purchased from Amazon.com is an undated product of a label called ioda. The booklet looks like it has been photocopied on obsolete equipment. One merely gets an impression of what the original record cover must have looked like. The tracklist on the back is the only information you're getting. If you want to find out who the other musicians are, you'll have to do some research on the web. (I wasn't surprised to learn that Ramon Morris was accompanied by Mickey Bass on bass, Mickey Roker on drums and Cecil Bridgewater on trumpet. All of them are beautiful musicians and sound in great form on this disk.) Fortunately, the sound quality on this cd is okay.

In summary: an absolutely indispensable recording, but try to avoid the ioda cd reissue if you want more than the music itself.

Ramon Morris' lone Groove Merchant date remains one of the most potent fusion records of its time. An uncommonly soulful and nimble tenorman, Morris proves ideally matched to the jazz-funk idiom, and Sweet Sister Funk achieves a near-perfect balance between its mainstream and experimental leanings, forging a series of fierce grooves as imaginative as they are accessible. Recorded with a crack supporting unit including trumpeter Cecil Bridgewater and percussionist Tony Waters, the album radiates with positive energy -- it's a genuine shame Morris never again recorded as a leader, because the mind reels at the possibilities his muse might have pursued.