Peter Hammill
1990
Out Of Water 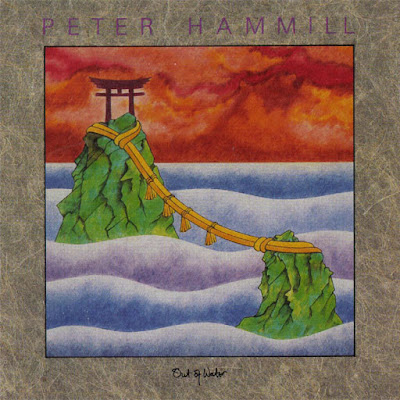 
After two «true» solo albums, Peter is again surrounded by some of the Graaf gang and I won't complain. I was rather disappointed with his last album ("In a Foreign Town") and I was looking forward to get a full band "solo" album.
But if one is expecting a partial VDGG effort, let me tell you that you find it here. Even if "No Moon In The Water" fully brings us back into this world, it is not yet enough to be impressive. And the least I can say is that both opening numbers aren't really thrilling either.

The listener has to wait for "Our Oyster" to feel that the great man is back. Weird lyrics, subtle backing band and Peter's delicate voice. A well known combo. But it works damned good.Just as the fine violin play during "Something About Ysabel's Dance". Well done Stuart.

"Green Fingers" is probably the first song during which one realizes that Jackson is on board. Not that his sax play is over-invading but just because you can finally hear the big man. Which is always a pleasure to my ears. One of the best track of this album.

The album ends on two longer songs, but the repetitiveness of "On The Surface" is not convincing. Eight minutes of the same notes are too long and offers little to be laudatory about. Backing vocals remind me some "Talking Heads" ones (but it is not the first time that I could find some similarities between them). Still, the guitar work in the last section does convey a nice feeling.

The story is different with "A Way Out". This one is a fantastic Hammill song: grandiose vocals and a perfect band to raise this song to the masterpiece status. Peter on the keyboards is extremely emotional; but what to say about his brilliant vocal performance? THE highlight of this album, no doubt.
Posted by Zen Archer at 5:40:00 PM