Peter Hammill
1986
And Close As This 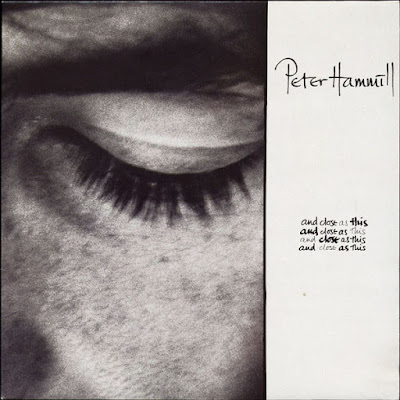 During his (excessively) plentiful career, Peter has used us to switch from a full VDGG line-up to the most intimate one like for "And Close As This".
I have to say that I would tend to be more attracted with the prior of those, but as soon as I hear his voice, being surrounded by the whole gang or just with a piano, the charm (almost) always operates.

The man is just so great that he conveys lots of feelings throughout his huge work. Of course, if you are not touched, the approach is more difficult. But it is worth a try.

I won't tell that this album is a jewel, a masterpiece. It is a pleasant and relaxing album to listen to. Like I do on this Saturday afternoon. Sharing my views about it with my prog friends.

Just embark one of his most intimate album so far. Let yourself go (and there's no Jean Genie behind this), listen carefully to his vibrant lyrics and just be charmed. At times, the man is getting angry and tortured as we know him so well ("Silver"), but most of the time he is amazingly soft and quiet like during the love song "Beside The One You Love".

Be warned though that this album is not for everyone. Some will be bored to death while listening to it, while others will be touched by Peter's intricate lyricism and beauty. I belong to the latter category. And it's always nice to hear Peter saying: 'I'm in good form, I'm feeling fine (Confidence).
Posted by Zen Archer at 5:27:00 PM