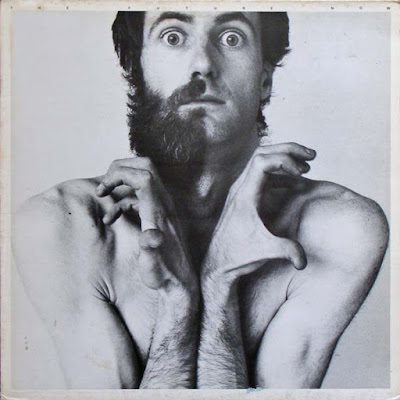 * Recorded at the All Souls Unitarian Church, Kansas City, on 16 February 1978 (released on Skeletons


This first album after VdGG's final break-up is certainly not the easiest of Hammill's album to say the least. As the opening track says, Peter was on the verge of the big three O's and obviously the man had a lot to say or at least to try to express his thoughts. Can one ever speak of any Hammill albums and say that it is transitional? Not really as Hammill's whole career always seemed transitional, but if one album had to be it, this might be the one.

Peter plays nearly all of the instruments himself except for the odd violin and sax, and this could the album that is truly his most personal. Most of the tracks on this album appears to deal with life's uncertainties or shortcomings, and this angst (check out his photo on the sleeve to get confirmation) sometimes translates into his music as the eerie Caught In The Mousetrap indicates or the Energy Vampires (clearly the industry vultures).

There are true moments of wonder as Mediaeval is one of Hammill's more bizarre adventures mixing chorals with his bizarre (and almost yelled) prose and the following Motorbike In Africa and The Cut. The average proghead will no doubt really get the feeling that Peter is taking us through the meanders of his sanity and we are not sure if he is headed in or out of the danger zone. The finale Palinurus is probably the tops Hammill has ever gone in weirdness. There are many moments when Hammill's intimacy on this album becomes a bit uncomfortable, not because his proximity or his prose, but mostly because of the purpose or more likely the interest or usefulness. Do not get me wrong, this is typically the type of albums that will unravel its secrets and intricacies as time goes on and repeated listenings (IF you can stand them) go by. For my part, I doubt that the extra time spent on this album will rewarding enough to warrant the investment - both in time and money. But this album (or at least its second (vinyl) side is certainly a must hear at least once for everyone hanging out on the Archives.

I could be tempted to award the album a fourth star just out of its adventurous end, but I cannot bring myself to actually enjoy this album more than a third star. If you can get my drift, because I am not so sure I do myself, after such a weird 40 mins. If listened to properly, no-one gets out intact after the needle lifts from the wax.
Posted by Zen Archer at 3:48:00 PM