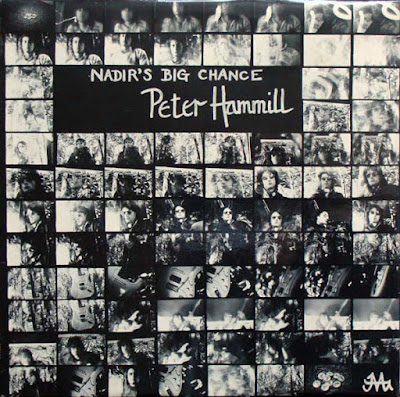 
Peter Hammill's 'Nadir's Big Chance' is a blitzkrieg attack from end to end on love, loss and alienation.
The music is compelling and it is lyrically poetic with a tour de force performance from Hammill. It is one of Hammill's heaviest trips and delivers on every level. 'Nadir' begins with the raucous title track with such moving lyrics as "if the guitars don't get you the drums will.." Hammill screams the lyrics, similar to 'Arrow' on 'Godbluff'. It is a Sex Pistols meet Van der Graaf Generator excursion into high strangeness. There is a blistering keyboard solo that goes off the scale before we get those drums at the end that segue into 'The Institute of Mental Health, Burning'.

Hammill is more laid back on this with his patented crooning vocals about an Institute that's burning... burning... burning... burning. It feels tongue in cheek except Hammill is so full of conviction in his delivery, as he is on all his performances. 'Open Your Eyes' features scintillating sax and some stabs of organ that work well together. There is a sense of ominous tension throughout. The instrumental section features shimmering organ and the staccato sax stabs are relentless, similar to early VDGG.

Another highlight worth mentioning is 'Shingle'. The quiet minimalist acoustic approach work well to create tension and melancholia. The suicide friendly lyrics are more existential than others on the album. "All the elements rage to explain that I should really be on my way, there is something that ensures that I must stay..." Hammill says he can't get you out of my mind and we believe him. The sax chimes in creating a brooding sorrowful sombre tone. The melody is subtle but effective and it quite a low chord that Hammill reaches. The instrumental features an odd time sig guitar with haunting sax echoing over. The ambience is uncanny and it is chilling to hear Hammill sing "I raise my eyes but my head stays bowed" as he seems deep in regret, the sense of alienation and loss is strong.

Another highlight is 'Airport' with Hammill in painful suicidal contemplation, "I stand on the tallest building and stare down at the grey runway... and the tail smoke of the Boeing jet that's taken you so far away". He farewells his love as she flies off and cries out that she may return. Emotional and poignant, but never indignant, Hammill manages to masterfully capture the simple feeling of losing a loved one. The sax once again is well executed, but Hammill's guitar crunches to provide a heavier atmosphere. The time sig changes midway through reminding one of the great VDGG days. He stands on the observation tower crying watching the plane soar up in to the grey sky. "All I can now do is walk away alone without you."

Worthy of note is also 'Birthday Special', another loud menacing track with Hammill's searing conviction. Great bass lines in this track and a crunching guitar with chomps of sax and drums, subtle it aint! "I've got something to say and it aint the usual sorta sob story that you hear every day". The scratchy vocals return on this and it has a strong rhythm, rocking along easily with some strange chord changes. "Birthday Girl! There's ice in the cauldron, look out now!" Complete with "Parrots in the pantry and Lizards in the loo" this is something special "like Hansel and Gretel never had". Strange song, strange lyrics and strange music merge together to create a freak out boisterous track that will scare the neighbours.

No wonder Johnny Rotten endorsed this album as an inspiration. Overall this is one Hammill album that stands out among the rest. Recommended to all VDGG and Hammill addicts