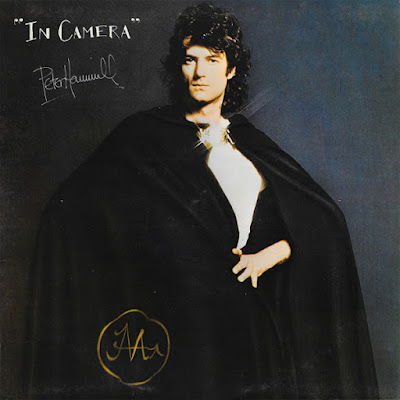 Note: Some editions have 7 & 8 combined as a single track

Peter Hammill's "In Camera" is sandwiched between two classic albums, "The Silent Corner and the Empty Stage" and "Nadir's Big Chance" and as a result often gets overlooked by many reviewers. It still captures the dark intriguing world of the Van der Graaf Generator years but retains a spirit of its own. Hammill is excellent on vocals and piano as always, but he has a more restrained style for many of the songs, at least not as complex as his previous material. Guy Evans is still present on drums, but Jaxon and Banton are absent thus removing the similarity to VDGG material. The real difference here is the synthesizer work of David Hentschel generating a decidedly different sound for Hammill, especially on tracks such as 'Ferret and the Featherbird'. Hammill is still able to blaze away with angry rockers such as on '(No More) the Sub-mariner' or 'Tapeworm' and croon soft with acoustics on melancholy ballads such as 'Again'. The guitar quartet on 'The Comet, the Course, the Tail' is unique also to Hammill's solo career.
The songs are not as immediately arresting as previous albums and not as memorable. However there are still some great compositions as Hammill returns to themes of contemplative existentialism on 'Faint-Heart and the Sermon'. Highlights of this song lyrically speaking include the poetic thought provoking; "My lungs suck useless air, like paraplegic dancers in formation team, my understanding sees high bound in its movements, contemplating answers that could break my bonds, to be half wrong would be in me improvement but my comprehensive faculties are impaired, and it seems absurd but now all I've learned are empty words are worthless?" The regal symphonic keyboard strings and odd time sigs on this are similar to the masterpiece album previous.

Hammill is at his best when let loose on manic apocalyptical epics such as the magnum opus of the album, 'Gog Magog (In Bromine Chambers)'. This last piece clocks over 17 minutes and features grand guignol cathedral organ and gothic mayhem. Many critics mention the ending of the track which is wildly experimental and not for the faint hearted.

The last half of the song is musique concrete with harrowing blasts of frenetic dissonance, thunder claps of percussion. The track is certainly as weird as Hammill gets and is mainly avant-garde experimentation for the sake of it and perhaps could have done with some trimming. However it is a departure from the rest of the material on the album and stands out as a conversation piece in the same vein as The Beatles 'Revolution 9'. Hammill manipulates various snippets of audio tape to create a sound collage of dark and disturbing nightmares. It is a fascinating montage of effects and creates a hellish disturbia similar to the work of Scott Walker or vintage Can. It is perhaps as dark as the artist gets and it lasts for over 7 minutes. It is hard to consume after an initial listen but it ends the album off nicely that was rather subdued to this point. Hammill once again demonstrates his power as an artist who refuses to be pigeon holed into any one genre style and whose creative vision is unsurpassed.
Posted by Zen Archer at 3:22:00 PM