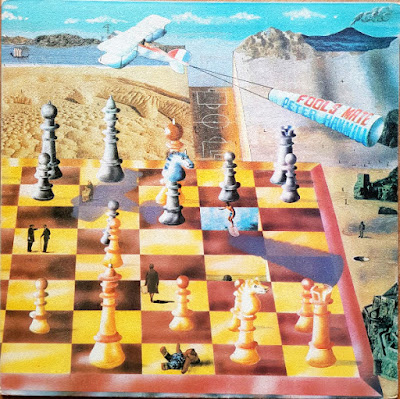 Peter Hammill's solo debut is a veritable outpouring of things Van Der Graaf Generator weren't doing at the time... pop songs, positive songs, tuneful embellishment, songs with a select 'leader', songs with less-than-fantastic vocals and songs with naive, light-hearted lyrics. Thankfully, this lot is all taken with a hint of irony, distinct professionalism and a number of immensely capable musicians (you may know Fripp, Jaxon, Banton, Evans and Potter... the rest are from folk rock band Lindisfarne, I believe) who are given freedom to work and a generally solid production (well, the bass sound is a bit dull, but I said generally). And most of the songs themselves are pretty good, the weak points never drop beyond a bit awkward and the high points are superb. Worth having, sooner or, more reasonably, later.   Feedback bookend 1 and we're off with the immensely fun Imperial Zeppelin. With brisk rollicks between mock-philosophical, cartoonish rock, haunting and deeply unusual interplay between Jaxon, Banton and Evans and even an R&B-type all-vocal section, it's probably the best thing on the album. Hammill's vocals flick from screeching to humming to hurried to snide and mocking without an inch of quarter given. Superbly played, of course, and a real highlight.

Candle is one of the more clumsy Aerosol Grey Machine sort of ballads. The mandolin presence is its main prop, and the vocal melody is confused rather than Lost. Nice piano, but, really, a throwaway?

Happy has a fun, choppy organ melody that is drawn together in the verses, and supported by Banton's great tone, the delightfully compact interplay of the well-greased Van Der Graaf Generator line-up (they can play positive music, believe it or not) and a dancing vocal melody. And that drum-and-organ flourish on the end is just gorgeous.

Solitude is the first of the album's convincingly moody numbers, with a haunting acoustic running along with a strange watery vocal and a gorgeous drawn-out, longing harmonica. The bass part perhaps seems superfluous to the rest of the piece until it at last comes into contact with Martin Pottinger's drumming and the occasional odd violin shimmer, and if the lyrics aren't as tight as elsewhere, they compliment the mood. Innocent, lonely, but empowered.

Vision is a piano and voice piece by Hammill. Frankly, there's only one way those go for me. The piano sound is wonderfully full (Hugh Banton is one of the rare pianists ), the voice flicks into the picture with precision, harmony, melody and the adoring vulnerability that fills out the lovesongs on, say, the more developed Nadir's Big Chance.... 'be my child, be my lover, swallow me up in your fireglow... take my tongue, take my torment, take my hand and don't let go' might seem saccharine to the uninitiated, but it's a mood anyone who believes they've been in love can probably appreciate.

Re-awakening is the odd one out? The grandiose combination of thick organ and limited piano makes an impression, as does the rushing breath all over the verses. On the minus side, I'm not convinced there's really a great song beneath the instrumentation, and if the lyrics are fun, they're not really particularly song.

And now, Sunshine, which features our stars Jaxon and Fripp playing rather unusually conventional  bluesy parts with great vim and vigour and Hammill sliding all over a vocal with refreshing contrast and energy and a carefree jazz piano. One of those pieces so positive you can't help being dragged in.

Child is a piece driven by a jabbing acoustic with Hammill's more naive voice and lyrics striking through with sporadic power. But even if I feel a more constant vocal could really turn this into a classic, the current content is already very, very good: some of Banton's lush, detailed piano-work, casual and yet striking flute from Jaxon and an astonishingly beautiful understated solo from Fripp.

Summer Song In The Autumn... male alto type vocals, displaying a healthy vocal range along a nice lyric, I believe, and with the presence and dedicated interaction of all five of the Generator-men here, this has a much-needed snap, isn't taken entirely seriously and comes off as a fairly potent piece. Hugh Banton's organ pedigree again works for it.

Viking is a bit of harmless medieval-vibed pastoral music with little bite, charming acoustics, some Fripp backgrounds along with the occasional lush lead from him, frankly unconvincing lyrics but at least an earnest approach to the vocals that offers something inside it to appreciate. A mead hall with ambience but not nearly enough drinks? And some water sounds, because otherwise, a song about Vikings would be unconvincing.

The Birds is essentially another Hammill piano-and-voice piece, though this time augmented by the suddenly extraordinarily beautiful work of Fripp, more of Banton's wonderful piano tone (reminds me a lot of Toni Pagliuca's (Le Orme) approach to the piano...) and a constructive rhythm section (Evans' capacity to contribute in quiet songs over or under the obvious numbers is one of his best attributes). And the vocal has the rounded and haunting qualities which I can't help feeling some other songs here could do with. Wonderful stuff.

I Once Wrote Some Poems is a one-man conclusion with another quick-and-dirty feedback bookend tacked on. The acoustic part is convincingly tender and then jarring, and Hammill's ability to express himself vocally comes across yet more powerfully without other musicians crowding the picture... the lyrics are some of the best here. It ends the album sternly.

Note on bonus tracks: Van Der Graaf Generator rehearsals of early takes of the songs. Probably not worth re-grabbing the album for unless you're an absolutely fanatical completionist or really love the album.

I think a three is probably in order... sweet, a tad sentimental, undertaken with a suitable ironic detachment, and once you're familiar with the overwhelmingly rich cake that is every single Hammill solo album from Chameleon to Over, perhaps this musical brioche is a decent alternative to the brooding coffee-shop desserts of the early 80s. Long sentence, final meaning: be aware of what you're in for and take a look at some reviews of other, later, more experimental and probably better Hammill albums you don't have before picking up this charming but occasionally lacking endeavour.

One mostly superfluous mention: any more serious fans (I mean the bootleg-collecting, got every League of Gentlemen CD type) of Fripp or Banton could do with this as well... their performances are some of the album's most beautiful and understated moments.
Posted by Zen Archer at 2:06:00 PM