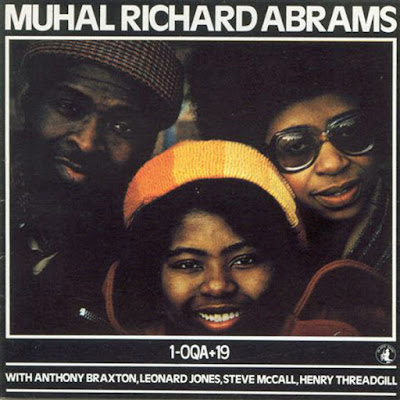 Muhal Richard Abrams hasn't presided over many small combos with a more imposing lineup than on this 1977 session. Anthony Braxton and Henry Threadgill played numerous instruments from alto, tenor and soprano saxes to flutes and clarinets, even adding background vocals. Fiery percussionist Steve McCall and bassist Leonard Jones, who also added some vocals, completed the lineup. The unit made demanding, harmonically dense and rhythmically unpredictable material, with Braxton's scurrying solos ably matched by Threadgill's bluesier lines and Abrams' leadership and inventive blend of jazz, blues, and other sources holding things together.

Chicago-born pianist Muhal Richard Abrams was already 47 when this LP was recorded in New York in the deep midwinter of 1977, and it showcases a musician for whom the phrase scarily multi-talented barely scrapes the air floating above the very toppermost of the surface. Largely self-taught, his compositions are able to be utterly beautiful while existing on the very edge of extreme chaos. If you had to categorise 1-OQA+19 you'd say it was free jazz, but you might as well say it was inspired by the sound of a terrified wolf fighting an angry badger, or a man with trumpet stuffed up his jumper falling face-first down a glass well: none of it means anything, really.

What is clear is that there is an exultant, endlessly expressive energy at work here and, really, the best any of us can possibly hope to do is press play on the opening track Charlie in the Parker and try to hold onto something solid as every instrument explodes into life simultaneously. Arhythm Songy takes a Thelonious Monk-like piano melody and smashes it to pieces just because it can – it's like someone unlearning everything they've ever been taught about music in an attempt to get back to what it was about the art form they liked in the first place. You can't do anything to 1-OQA+19: don't try and stick it on before you pull the Marigolds on and get stuck into the washing up, not unless you want to have a lot of broken crockery and bent forks on your hands. Ritob dances with a fiery exuberance, its hips disintegrating and dislocating wildly as it goes; then there's Oqa which considers how "laws are connected with the motion of the cosmic body, the sun, the planets and the signs of the zodiac", which we all knew anyway, right? But it's nice to have someone layer it on with rumbling bass and acidic, shape-shifting analogue synth whispers. If you were looking to score a short film called Oh Dear, I Appear To Have Lost the Delicate Balance of My Mind then, frankly, this would be a great place to start.
Posted by Zen Archer at 11:44:00 PM