Grassella Oliphant - 1967 - The Grass Is Greener

Grassella Oliphant
1967
The Grass Is Greener 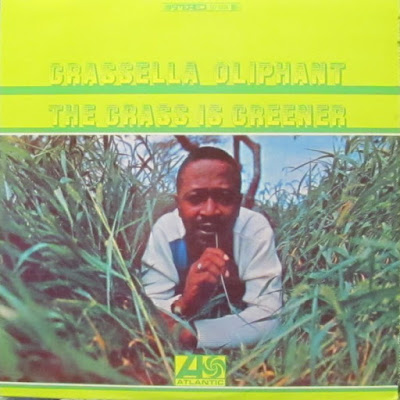 Drummer Grassella Oliphant's The Grass Is Greener is as good as it is rare. One of many soulful organ jazz dates that have gained cult status among sample hungry hip-hop and acid jazz devotees, this 1967 Atlantic album is packed with great playing and solid grooves (besides recording only one other album as a leader, his 1965 debut The Grass Roots, Oliphant also appeared on dates by singer Gloria Lynne and organist Shirley Scott, among others). With guitarist Grant Green and B-3 master John Patton completing the classic organ combo setup, the trio particularly stretch out on fine numbers like "Cantaloupe Woman" and Patton's own "Soul Woman." While these cuts are marked by a progressive, almost modal sound, much of the other material, which also features tenor saxophonist Harold Ousley and trumpeter Clark Terry, has a more down home and groove-heavy flavor; this is especially true on Terry's "Peaches Are Better Down the Road" and a cover of Allen Toussaint's classic bit of New Orleans soul, "Get Out of My Life Woman." Other standouts include a rendition of Marvin Gaye's "Ain't That Peculiar" and Ousley's breezy Latin swinger "The Latter Days." A great set.

It gets to you. That slow draggin’ beat of Get Out My Life, Woman that makes you think you’re listening to an alternative backing track of the Allen Touissant tune as performed by Lee Dorsey with Clark Terry ‘singing’ through his pocket trumpet, flavored with the lazy horns that state the well-known theme and the added bonus of John Patton’s greasy organ. A surprising start to a hip record by obscure drummer Grassella Oliphant.

Well, not that obscure. A number of hip hop artists have plundered The Grass Is Greener for beats, as well as Lee Dorsey’s funky recording of Allen Touissant’s composition. Think what you like about these methods – whether it’s pure theft or a mature artistic effort – at least they had good taste.
I wouldn’t call The Grass Is Greener an all-out smash, though. One’s search for a bit of flair in Oliphant’s drumming in the two jazzier bits will remain fruitless. And from the soul and funk-jazz tunes that luckily comprise the main part of the album, Ain’t That Peculiar (the 1965 hit for Marvin Gaye that was written by Smokey Robinson & The Miracles and was a very popular cover among soul jazz artists of that period) doesn’t really pick up steam and is redeemed largely by the sharp-as-a-tack presence of guitarist Grant Green. The rest, however, and especially organist John Patton’s compositions Soul Woman and The Yodel are on the ball from start to finish.

Both tunes receive an unconventional snare treatment by Oliphant, a continuous, rollicking roll that is continued throughout. It’s powerful and stimulating for the other musicians. The Yodel is a particularly heavy cooker in which Patton and Green trade red hot solo’s. With such hard bop giants in tow, it’s hard to go wrong, and Oliphant doesn’t.

A comparison with John Patton’s album Got A Good Thing Goin’ (recorded April 29, 1966), that also has got Grant Green aboard, is justified. An uncommon figure of three tunes overlap with The Grass Is Greener: The Yodel, Soul Woman and Ain’t That Peculiar. It includes a version of the latter that runs smoother than Oliphant’s take. John Patton’s originals are cookin’ and faster executed, including outstanding Green and Patton solo’s. Nevertheless, I prefer the earlier 1965 versions of The Yodel and Soul Woman, that possess the added tenor sax of Harold Ousley on The Yodel and a more ‘southern’ feel. Both fine albums, I dutifully stipulate, deserve a place in your shopping bag.

Grassella Oliphant (nicknamed “Grass”) dropped out of the business in 1970, only to return professionally after a 40-year hiatus in 2010 in the New Jersey area. He won’t make the cover of Downbeat Magazine, but will undoubtly serve the citizens of New Jersey a tasty and spicy meal.
Posted by Zen Archer at 11:39:00 PM