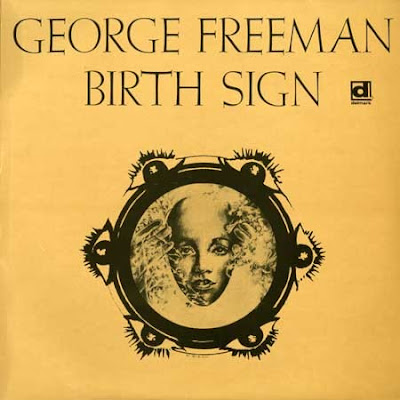 
Jazz guitarist George Freeman is the least prominent of his famous family from Chicago, primarily because he stayed home and was a breadwinner for his wife and children. Nonetheless, Freeman has been an important member of the Chi-Town soul-jazz movement that helped foment that style. In his early professional years starting in the late '40s, Freeman recorded with the territory bands of Joe Morris from 1946 through 1949 and with Tom Archia in 1947 and 1948, and was asked to support touring musicians coming through town, including Lester Young and Charlie Parker, recording with Parker for the Savoy label (although uncredited until after the fact). In the mid-'50s, he started a long association with organist Richard "Groove" Holmes, and though relatively undocumented, did appear as a sideman and song contributor on the World Pacific and Prestige labels with Holmes. While working with Gene Ammons and Shirley Scott, Freeman decided against any more road work. His debut album, Birth Sign, was recorded in 1969 with help from organists Sonny Burke and Robert Pierce. George Freeman is the brother of tenor saxophonist Von Freeman and drummer Eldridge "Bruz" Freeman, and the uncle of Chico Freeman.
He has worked with members of the Association for the Advancement of Creative Musicians (like the Art Ensemble of Chicago, Kalaparusha Maurice McIntyre, and Lester Lashley) and extensively with his brother Von Freeman (who has also played piano on his dates), and he occasionally puts down the guitar to play saxophone himself. In the '70s, as soul-jazz was merging into disco, he produced three albums for Sonny Lester's Groove Merchant/LRC company -- New Improved Funk, Man and Woman, and All in the Game. Recording companies ignored Freeman for nearly 20 years before Joanie Pallatto and Bradley Parker-Sparrow signed him to their Southport/Orchard label, issuing Rebellion in 1995 and George Burns in 1999. His only other major-label effort, At Long Last George, was released by Savant Records in 2001. Over the years, George Freeman has stayed in Chicago, and has worked with an impressive array of great jazz artists, including Ben Webster, Illinois Jacquet, Sonny Stitt, Sonny Criss, Johnny Griffin, Jimmy McGriff, Les McCann, Eldee Young, Harold Mabern, Kenny Barron, Bob Cranshaw, Buddy Williams, Kurt Elling, Rene Marie, John Young, Red Holloway, and the Deep Blue Organ Trio, and lesser-known Chicagoans Lou Gregory, Lloyd Wilson, Ron Cooper, Maurice Brown, and Michael Raynor.

Chicago electric guitarist George Freeman was a quintessential sideman when backing bands led by Lester Young, Charlie Parker, Richard "Groove" Holmes, Gene Ammons, and Shirley Scott. This is his debut recording, done in the height of the soul-jazz era circa 1969, featuring his famed brother Von Freeman on tenor sax for four tracks, drummer Billy Mitchell throughout, and either Sonny Burke or Robert Pierce on the Hammond B-3 organ. At times Freeman's sound traces to no single individual source, though it is steeped in Chi-Town blues and a progressive stance that is apart from the Wes Montgomery/George Benson school of the day. Freeman's individualism is heard to best effect as he rocks out with a bit of distortion and loose associations on the boogaloo "Mama, Papa, Brother," while during the title track you hear pinched, lemon-sour notes under a tribal village groove that approaches Native American beats. Burke, a truly unsung hero of the organ, burns for long stretches during the ultra-slow standard "My Ship" and slides through the changes of "Hoss," which is clearly based on the changes of "Sweet Georgia Brown." Von Freeman is completely in tune with his brother when they play in perfect tandem on the soulful "Cough It Up," fluttering à la Charlie Parker, while ramping down on the ballad "My Scenery," where the saxophonist plays a remarkable, in-tune, enjoyable solo. The cut separate from the rest, "Must Be, Must Be," includes AACM members Lester Lashley and Kalaparusha Maurice McIntyre on trombone and tenor sax, respectively. It's an easy blues elevated by the horns and Pierce's fleet multiple note lines rivaling Jimmy Smith, representing the ultimate modern confluence in what was happening at that time in Chicago. Too bad the world never really heard enough of George Freeman, and although this is a small taste, it is a more than adequate amuse-bouche.