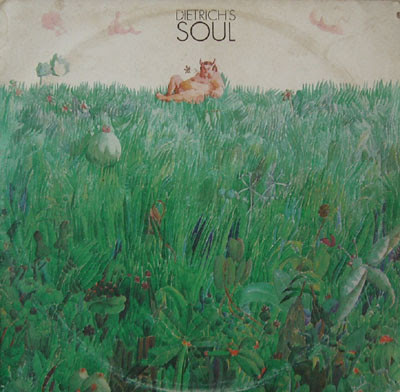 Record is called "Dietrich's Soul" on the cover.

The more one investigates, the more one experiences, the more one finds that the world is wider and more vast than they ever imagined.  Case in point, Wolfgang Dauner, hailing from Germany, and probably the first to explore jazz fusion and experimental rock, making him the godfather of the current Kraut Rock movement ... and still directly influencing electronic music today.

Rischkas Soul is both adventurous and ambitious, yet is unpretentious, honest and amazing tight.  This classic and highly overlooked presentation from 1969, privately pressed and released, is a time capsule of sorts, where Wolfgang Dauner sets out to build a sightly psychedelic structure filled with soul and jazz, centered around Dauner’s piano and organ ... capturing the swinging London mystique of the 60’s.  In doing so he’s given Rischkas Soul a funky rhythmic backbeat, over which he’s laced fiery guitar solos filled with wah-wah and mild reverb that mesh in a musical dance with injections of atmospheric and ripping organ washes.

This is a body of work that was experienced and understood by few at the time of its release, but has charted the course and musical endeavors of everyone who heard it at the time.  It’s truly one of those “not to be missed” bodies of work that will connect dots and open doors that you will never be able to close.
.
Recorded November 28, 1969, Wolfgang Dauner's Rischka's Soul (aka Dietrich's Soul) comes more from the restless jazz school, than the subversive underground that was just beginning to brew in Germany at this time. Dauner was no doubt a major influence, and perhaps even an inspiration, to those looking to expand the music norms of the day. Krautrock, as we know it today, had its founding during this era, but it didn't come from the mainstream, of which Dauner was a part of. The album was mostly known from its posthumous release on Brain, though it wasn't a contemporary recording. Still, without a doubt, Dauner was a pioneer in mixing psychedelic rock and jazz seamlessly. Much of this album sounds like the ultimate backdrop to a "happenin' club scene" to a 1970 art film, with the participants suitably stoned out of their bloomin' minds and squinting wildly while the Klieg lights were beaming off their freshly scrubbed cheeks. Whether the youngsters were dancing or meditating, Rischkas Soul was providing the soundtrack to their soul searching odyssey of utopian dreams. One of the better time-and-place albums of the day, and a must pick up for fans of 1969 era jazz rock. Just don't expect cutting edge Krautrock here.

Lots to talk about here regarding the release itself, and it's certainly a confused state. The most known press, and the cover most associated with the album, is the original Brain release similar to the second photo. It features a striking day-glo yellow gatefold cover, and this is the version I've owned for many years. I had no idea until somewhat recently that the Brain press was actually a reissue of an earlier recording. The CTR (Creative Team Rischka) release is still unknown and pretty much extinct. These photos all came from Discogs, where apparently one copy was sold. There's been none for sale on ebay, or at least that has been captured. But even this press is confused, as the label and cover do not match. As you can see, the title was originally to be called Dietrich's Soul. But I guess Rischka won the contract and also apparently got the naming rights too! The 1974 release was part of Metronome's "This is" series, and were really just represses of earlier albums (or comps in some cases), and released on the 2001 Brain imprint. These presses are all inferior to the originals (and the covers are dull). The '81 press (black label) is a single sleeve, but uses the desirable yellow cover. And now the Long Hair release finally replicates the Brain "original" in its full glory - and is the first modern reissue. Since I already have that on LP, I went forward with the CD. It does feature very good sound, but is taken from vinyl (they did a great job though). The liner notes are excellent, but frustrating, as is often the case with Long Hair. They don't provide much detail at all regarding the release itself, and this is a story that needs to be told! What we do get is the story of Wolfgang Dauner and some of the participants from that era of his band. I did learn, however, what the story behind the "Sounds" label on the front cover means (it's also on Guru Guru's 4th). It was a "seal of approval" from the magazine of the same name. Interesting. Oh, one other thing about the CD - they inexplicably reversed the sides of the recording so that it starts with Side 2. Why they did this we'll never know. Perhaps the goal here was to ensure the release remains in a confused state.
Unencumbered Music Reviews
Posted by Zen Archer at 3:37:00 AM