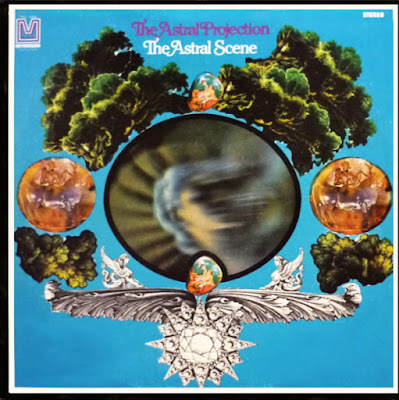 Bernice Ross and Lor Crane had enjoyed some mid-1960s successes as songwriters (Danny White's "White On White") and as producers.  Crane produced several of Chad and Jeremy's hit singles and albums.  1968 saw the pair dipping their creative toes into psych via the studio project The Astral Projection.  Musically "The Astral Scene" is an oddity falling somewhere between Curt Boetcher-styled sunshine pop, Association-styled top-40 and Animated Egg styled exploito.

Ross and Crane wrote all of the material but it was performed by an all star cast of sessions players including guitarists Al Gorgoni and Hugh McCrackin. Thematically tracks such as 'The Sunshine Seekers' and 'Plant Your Seeds' were highly orchestrated tying together as a full-fledged concept piece.  If you waded through the extensive back panel liner notes by Barbara Christensen, the plot line had something to do with the concept of escaping the physical body to experience spiritual embodiment.

Certainly something many of us ponder day in and day out ...  In spite of the goofy titles and lyrics ('Today, I saw The Sunrise') and the fact the arrangements were full of rather spacey instrumentation, virtually of the songs were quite commercial. It's easy to imagine stuff like '(Mind Flight) ... Overture The Airways Of Imagination' or 'The Happening People' having been adopted for some sort of 1960s television theme song.

This has absolutely nothing to do with the music, but the album's also kind of interesting in that it carries a dedication to 'Oric Bovar'.  Bovar's best known as a guru who attracted a following in Broadway circles.  Folks such as Carol Burnett, Marsha Mason, Bernadette Peters and Neil Simon fell under his spell and helped him to become quite popular for a short period of time.

Originally renowned for generating accurate astrological charts and prescribing medications that could provide one with inner peace, Bovar was actually a nut case.  Convinced he was Jesus Christ, he instructed his followers to start celebrating Christmas on August 29th (his birthday).  He started arranging marriages between followers, mandated strict diets for them and forbade extramarital sex among his followers.  Bovar also attracted attention in the Fall of 1976 when he tried to resurrect the body of a 29 year old disciple who had died of cancer.

Nothing wrong being positive, but Bovar and a couple of followers spent two months chanting over the decomposing body in a New York apartment.  Someone finally called the cops and he was arrested for violating city health ordnances.  In April 1977, a couple of hours before he was to appear in court Bovar decided he would jump of of a 10th floor window with the intention of appearing in court cloaked in resurrected glory.  Needless to say Bovar missed his court appointment.

A straight reissue of a 1968 album originally issued on Metromedia, The Astral Scene is one of those weirdly compelling pop albums that could have only emanated from the Age of Aquarius. A conceptual undertaking meant to reveal the wondrous cycle of the telepathic phenomenon of astral projection. The album somehow manages to communicate the complex precepts of astral experience in lay terms and remain deliciously frothy pop at the softest, most easy-listening end of the spectrum. It works the same sonic conceit as the Fifth Dimension (only in lily-white, soul-lite mode) or the stable of bands (the Association, Ballroom, Sagittarius, and Millennium) produced or helmed by Curt Boettcher, only without the countercultural credibility and legitimately trippy factor. That's because the album, as with dozens of similar efforts from the era, is really a quasi-exploitive cash-in project. Essentially a studio creation conceived and written by Bernice Ross and Lor Crane, who did not take part in the actual recording (although the latter co-produced). The playing was done by ace sessionmen (Al Gorgoni, Hugh McCracken, Frank Owens, Buddy Saltzman, etc.), and then the music overlaid with delicate strings, and a brass and woodwind section. In a sense, it entirely missed the thrust of the decade's more original and exploratory music that it meant to exploit. But in another cosmically ironic sense, it captures the heady era far more vibrantly than those more important artists, partly because the music of the Astral Projection is nowhere near as timeless as the music of those artists. And partly because the explosive creativity of the era filtered in weird and wonderful ways even down to the eternally unhip music business types responsible for this album, giving them carte blanche to experiment with the money formula, but not too much, thereby resulting in this odd hybrid of commercially minded but ultimately uncommercial music. Like most such efforts, it is wildly uneven and only intermittently successful, containing too much lightweight material and unbearably twee sentiment to take serious, but then that partial failure to execute its pretensions is perhaps the most intriguing aspect of such masterworks, and especially this one. Still, The Astral Scene is largely soft-pop ambience. Songs are scarely present (and as a result it's difficult to single out particular successes), which stands to reason since it is more studio exercise than artistic inspiration. Nevertheless, it has moments of pure delight that bring the '60s experience back in full technicolor.
Posted by Zen Archer at 8:26:00 PM