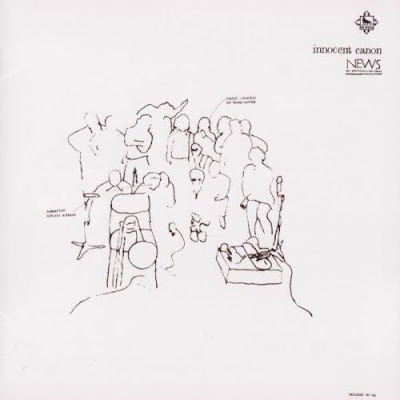 One of the matchlessly eccentric sound kaleidoscopes - even in Japan every reviewer called him as a musician with a warped soundscape. Yes, he might be a confuser (in a good sense). Amazingly, Takeshi promoted Noriaki KANOH, a young and promising photographer, to a narrator (free talker?) in this album. Such a strategy we could not find in another one in 1971. Anyway, 1971 was a golden year for Japanese progressive rock scene, as I've mentioned again and again ... and the credit of Kimio MIZUTANI can be found on lots of album sleeves in that year. Even in 'Innocent Canon', Kimio's aggressive guitar solo can lead all instruments and all listeners. And yeah, Takeshi's strict drumming absolutely can support this 'air' and 'ground'. The narration by Noriaki (currently he's called 'Tenmei' though) is sometimes lazy, sometimes unique, and sometimes ardent. Mysteriously, for me his talk was boring previously, but to listen to this stuffs again and again has interested me in his fuzzy fascination for music.

This album cannot be discussed only under the category of jazz-rock, though Takeshi was (and is) a renowned Japanese jazz drummer indeed. Kimio's heavy guitar and ethnic sitar, Toshiaki YOKOTA's mind-altering flute, and especially Noriaki's flat narration - all elements can make these songs more psychedelic and more avantgarde. Listen to the first track "Introduction" directly ... heavy, headaching, hypnotic riffs and enthusiastic but level narrations are very typical upon Japanese psychedelic progressive rock scene in the early 70s. In the next "The Death Of Janis" (dedicated to Janis Joplin) Toshiaki's flute solo is very mind-blowing, in spite of Noriaki's sensitive talk. The third "Go For Nothing" has violent 'NO!' voices and at the same time a delightful, pleasant jazz ensemble ... this contrast is wonderful. "Alone", the sixth, is very impressive with Oriental fragile mood by Kimio's sitar. We feel impulsive tension even in the last song "Epilog", where Atsushi SUZUKI's whistle be very comfortable indeed.