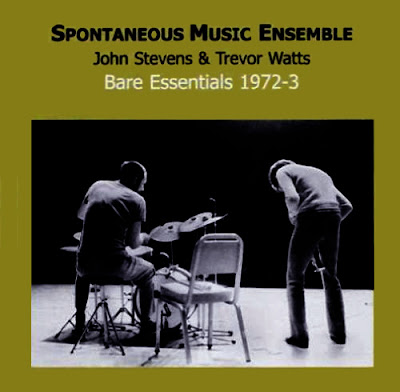 
Ever since I heard this duo, I have thought that if any music deserved to be called minimalist it was this one, because they managed to strip the music down to its bare essentials yet keep its content - unlike so much minimal art that seems to 'throw out the baby with the bathwater'.

For most of the years 1972 and 1973, the Spontaneous Music Ensemble was the duo of John Stevens and Trevor Watts (with others added from time to time on an ad hoc basis). One should not, however, think of this as an ‘in between’ phase – it was an intense period of exploration and experimentation. They used to rehearse in private most days, and perform in public most weeks usually at the Little Theatre Club in London where most of this music was recorded.

When an opportunity of a record release arose, Stevens tended to put a special enhanced group together rather than use a regularly working group. I was so taken by this duo being a complete group, that I was determined to issue an LP by them unenhanced when I started Emanem in 1974. Hence FACE TO FACE, recorded late 1973. Over thirty years later, we now have a most unexpected but very welcome opportunity to listen to some earlier work by this duo.

At the time, some people thought this music was cold, clinical and lacking variety. These recordings show that it was far from all that – it varied from the emotional ferocity of Free Jazz heard in parts of FOR PHIL to the quiet stillness heard in LOWERING THE CASE. All this was achieved with Trevor Watts just playing soprano saxophone, and John Stevens playing either his small drum set or his recently acquired cornet. (They also made some use of their voices.)

Portable cassette players became generally available around 1970, and Trevor Watts was one of the first people to use one to extensively record performances. Such machines were extremely convenient to use, but they tended to make noisy recordings. However, it has now been possible to clean up the sound thanks to the wonders of modern digital technology.

Watts recently went through his cassette archive and came up with several hours of duo recordings that he made with Stevens in late 1972 and early 1973 – a period not otherwise available on record. Prior to this release, there were no published small group SME recordings made between the mid 1971 quartet with Julie Tippett and Ron Herman and the duo in late 1973; and there were no published examples of Stevens’ cornet playing from before late 1973.

I set about going through this material, cleaning up the sound, and reducing the quantity to a manageable amount (with Watts’ approval). A few items were eliminated because the recordings were faulty. Some performances were dispensable because they were similar to others, but not so inspired. Most of the finally selected pieces have been edited – after all it was Stevens who alerted me to the art of editing improvised music!

Thus IN THE MIDDLE comes from a 38-minute performance which got off to a tentative start. Then towards the end, Stevens sounds as though he lost interest – something he often did after feeling that a successful piece had run its course. These two lesser parts have thus been removed to leave a very fine middle 20-minute section. At first sight, Watts’ playing may seem limited, but further listening and acclimatisation reveals an apparently infinite supply of ideas. Watch out for a conversational section where Stevens just plays wood blocks, bells and elbow-tuned drums - the two players particularly seem to fit together hand-in-glove there. This contrasts with the forward momentum of IN THE MIDLANDS which starts the CD.

The conversational aspect is even more obvious on THREE EXTRACTS, which is now the earliest recording of Stevens’ cornet playing to be issued. This track consists of the start of a 29-minute cornet and saxophone duo, along with two later excerpts, eliminating three less inspired sections. After a fairly equal discourse in the opening, the second extract finds Stevens repeating a note which goads Watts into some very emotional playing, followed by a section in which Watts alternates voice and saxophone notes in a very African way. The third extract involves a considerable amount of flexible droning.

It can be argued that improvisations should not be edited to enable one to follow the whole flow. Or that it’s interesting to hear how musicians like Stevens and Watts managed to get themselves out of relatively dull situations. However, I think that a published recording designed for repeated listening should only really contain the best bits. After all, there are non-musical as well as musical events that influence improvisation, and we rarely know what happened to musicians in the period before the performances.

In one case we do know of an outside event: The great jazz drummer Phil Seamen died earlier on the day that FOR PHIL was recorded. This heartfelt performance is included here complete. It begins in a very stark manner as if the duo were coming to terms with the sad news they had just received. The momentum picks up sporadically, somewhat abetted by Stevens’ wailing, and eventually reaches a fever pitch at the height of which the drums are replaced by the cornet. The tension subsides as the two horns go through a funereal section, and quieten down to some afterthoughts. How can this be called ‘abstract music’? It’s one of the most moving requiems I have ever heard.

The two complete NEWCASTLE pieces are perhaps more typical of the duo’s work at the time – very moving within their somewhat static environment. They both generally stay in a particular area, but the first one has a surprising final section.

Around the change of year, the duo started concentrating on Stevens’ extreme minimal click piece FLOWER. They carried on in this manner for most of the year – an austere period of removing everything but the bare essentials – and an example from the following October has been released on FRAMEWORKS. Both Trevor Watts and I feel that the later released performance tells one all one needs to know about the formal aspect of the piece, so the clicking aspect has been left out of the January pieces heard here leaving just the ensuing free sections.

The seven OPEN FLOWER tracks, like the later FACE TO FACE pieces, show how one of Stevens’ basic conceptions can result in improvisations taking off in several different directions. Note how the music goes off in a somewhat unexpected direction half way through the third one when Watts, momentarily left on his own, boils over. BEYOND LIMITATION is another example from a few weeks later of where the same concept can lead, with Stevens adding a complementary vocal line. OPENING THE SET is the start of their performance at a festival they organised at the Little Theatre Club.

LOWERING THE CASE contains an example of a different sort of minimalism that they often indulged in - a very quiet and slow section that anticipates some more recent directions - something that can also be heard on other recordings from the period. (This section was difficult to clean up as the music was quieter than the hiss, which may be the reason why this area of playing didn’t really catch on until the advent of digital recording.)

Trevor Watts plays superbly throughout these two CDs. He actually plays superbly throughout all of the unedited cassettes, whereas John Stevens was always trying something else and not always succeeding. However, his playing is magnificent on the music included in this album, and there is much of his unique small kit drumming which somehow implied both momentum and stasis at the same time. But perhaps the most amazing aspect is their togetherness – they often sound one four-armed person playing two instruments.